Escholzia or California poppy is a very bright and beautiful flower. The main colors for him are sunny yellow and bright orange - hot, like summer itself. But terry escholzia can be pink, white, red and mixed colors.

A bright mixture of different colors of escholzia looks especially impressive on alpine coaster and flowering lawns. In addition, this plant has beautiful leaves: carved, gray-green. In specialized stores, you can purchase a ready-made mixture of seeds or make a bright pattern yourself.

Eshsholzia terry is a plant for the lazy. This flower is so unpretentious that it can survive in rather extreme conditions. Prolonged lack of watering, the burning sun and even an autumn cold snap will not be for escholzia fatal. If you provide the plant with moderate watering and timely feeding, it will bloom profusely for 1.5-2 months. Moreover, each flower of Escholzia opens only for one day. 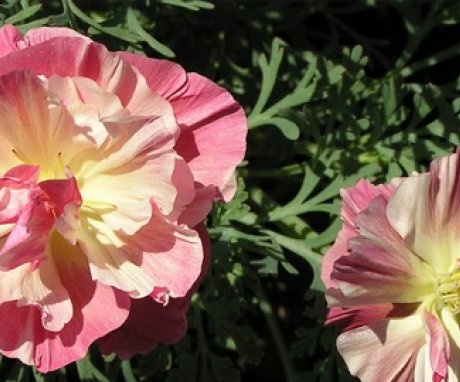 What to look for when caring for escholzia:

The soil terry escholzia prefers light, moderately fertile. Even sandy soil is suitable for it, but with good drainage properties. But it is not worth planting a plant in moist soil, this also applies to soil filled with fresh manure.

Excessive moisture is bad for this plant. But during the flowering period, it is still better not to allow the soil to dry out for a long time. It is best to water when the Escholzia flowers close, that is, in the evening.

The most suitable place for the growth and flowering of escholzia will be an area where the sun shines abundantly. In a darkened place, the plant will begin to wilt.

To prolong flowering, it is important to remove box fruits in time, as well as buds that have already faded. An important role is played by top dressing, namely, mineral fertilization once before the flowering period (1 teaspoon of flower and natural organic fertilizer, as well as the same amount of nitrophosphate per 10 liters of water). For one plant, 2 liters of the mixture is enough.

Concerning pests, then often the leaves of Escholzia are attacked by the bean aphid. It is best in this case to spray the plant with a special preparation (for example, "Commander"). In addition, spider mites can create problems, which makes it necessary to remove the affected parts of the plant. 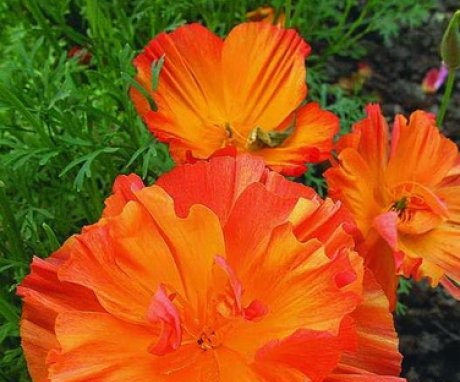 In the case of decay of escholzia, most likely, the cause was excessive watering. This often happens during dry periods when they are trying to "help" the plant. Remember, Escholzia actually tolerates drought much better than abundant moisture.

Another problem is the yellowing and shredding of the plant. This may indicate the presence of a viral infection. In this case, the infected plants must be removed to stop the spread of the disease.

Growing escholzia in the open field

Eschsholzia is sown directly into open ground, since the seedlings of this flower do not tolerate transplanting very well. It is better to sow flowers in late April or early May.For planting in the spring, the seeds are best kept in a cool place.

Can be sown in October as well. In this case, spring flowering will be earlier. When sowing in autumn, to protect early seedlings, it is best to cover them with a thick layer of leaves.

Escholzia seeds (like poppy seeds) are very small, so sowing them evenly is a very difficult task. It is much easier to sow the flowerbed more densely and thin out the grown seedlings, leaving a distance of 10-15 cm between them. You can also mix the seeds with sand and thus plant. Seedlings appear in about two weeks. 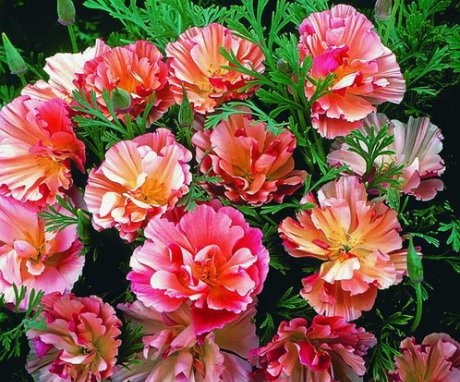 After at least five leaves are formed, and the escholzia reaches 10 cm in length, the plant can be thinned out. Escholzia will bloom approximately 40-45 days after it has been sown.

When sowing seeds, they must be lightly pressed into the soil and mulched. This is important so that the seedlings can appear, because they may simply not break through the hardened topsoil.

Another feature of this flower is self-seeding, which allows you to keep a beautiful flower bed in one place for several years. The only thing, in this case, it is important not to forget to thin out the seedlings in advance.

To harvest the seeds, it is necessary to cut the peduncle from the already formed, but not yet dried, box and dry it. The best way to do this is to put it in a box. After the poured seeds are collected.

Escholzia is an incredibly beautiful plant, despite the fact that each individual flower only lives for a few days. And on top of that, it is extremely easy to care for this beauty, which makes Escholzia just a unique gift from nature.