Ficus Benjamin belongs to the category of popular indoor plants. The main advantage of decorative culture is considered to be ease of maintenance and spectacular appearance.

It is very important to water the flower in a timely manner and systematically prune the shoots.

Below you can find out how to form Benjamin's ficus, with the peculiarities of crown formation and the rules for pruning. 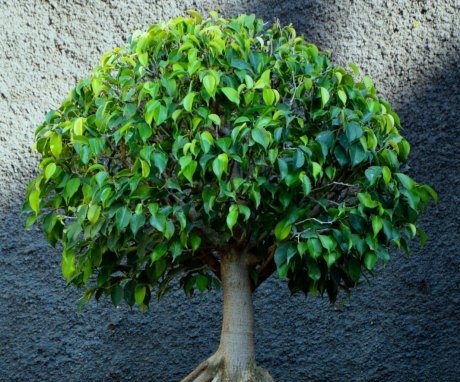 Ficus needs a systematic formation. The systematic carrying out of formative pruning of ficus makes it possible:

Important! Ornamental culture after pruning has the opportunity to improve its health and begin to develop faster. A tropical evergreen tree will become a real home decoration.

To form the crown and activate the growth of the ficus, it is recommended to carry out the pruning procedure in mid-March. In the autumn period, the formation of the plant is not carried out, since the culture must gain strength in order to survive the cold season.

If you cut the branches in winter, then the growth of young shoots will be observed exclusively in the place of the cuts. The crown will look one-sided. During pruning, it is important to get rid of damaged and dried shoots without regret.

The procedure for forming a houseplant is carried out in mid-March. Below you can find the basic rules of the process.

How to prune properly

Before proceeding with the formation of the crown, you need to stock up on the following inventory:

Note! To prevent viruses from entering the cut area, you should treat the blades of the instrument with a solution that contains alcohol.

How to properly trim the crown for beautiful growth

Excess shoots can be cut off at any time, but full pruning should be done only in March. To perform the procedure, it is recommended to use a pre-disinfected equipment, which will make it possible to avoid damage to the bark and prevent infection.

The slices are made obliquely over the dormant buds. The cut area is treated with a small amount of crushed activated carbon. 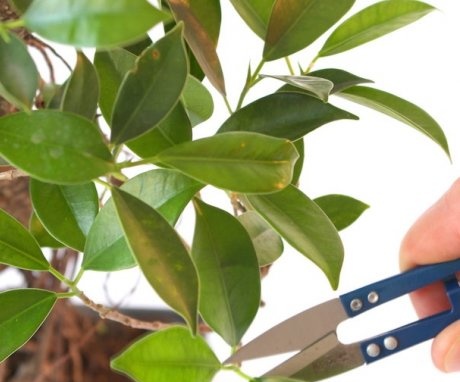 To give the plant an original appearance, you can form a crown by giving it a curly shape. Most often, flower growers prefer spherical outlines. To this end, you will need to pinch young specimens from above. In adult bushes, the central shoots are cut off.

Lateral young branches should be cut in stages. It is best to start at the end of winter. You can give the desired shape to the crown until mid-summer. Shoots appearing in the lower part of the trunk should be removed.

If desired, you can form a two-level stem. For this, the crown of the ficus is divided into several parts. The first and third will be located in the upper area. The second part should be placed between the levels. In this case, it is recommended to free this area from all shoots.

When forming 3 levels, it is necessary to divide the crown into 5 parts. The first, third and fifth will serve as the upper future levels, which have a spherical shape. If it is supposed to form 3 levels, then the crown must be divided into five parts.

Note! When forming a ficus from top to bottom, it is worth removing the upper part of the stem and cutting it off.

Ficus Benjamin can be shaped by braiding the stem.

Table 1. The most popular methods of plant formation.

How to make bonsai

Bonsai is considered a miniature tree, the appearance of which repeats the outlines of large relatives. As a blank, it is worth using varieties of ficus like Natasha and Exotics. The listed varieties have a number of advantages, namely the presence of:

When creating a bonsai, you should not use ordinary varieties, since this process will take at least 7 years, but using the varieties of ficus listed above will help grow bonsai in a couple of years.

When creating a bonsai crown, you will need to systematically cut not only the stems, but also the leaf plates. Trimmed foliage looks unkempt and brown. Pruning is done regularly during the spring and summer months.

To form the stem part, it is worth using an ordinary wire with insulation. It is important to avoid wrapping the barrel too tightly with wire to avoid scarring. The wire is wrapped around the stem and around the branches. After 5-7 weeks, the perennial will be able to independently maintain the proposed outlines. From this point on, the wire can be cut. 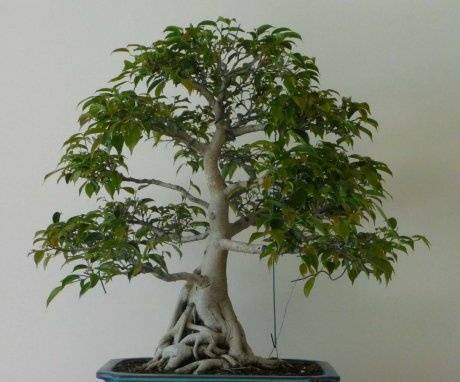 When forming a perennial culture, it is important not only to shorten the lateral branches, but also to direct the shoots in the desired direction.For this purpose, it is worth using special tensioning devices or rigid wire. In the case when 3-4 shoots are directed in the wrong direction, do not cut them off. It is best to take a piece of wire, twist it around the main stem and the necessary shoot, which with careful movements bends in the desired direction.

To change the direction of the shoots, it is worth using the spacers between the branches. A layer of foam rubber is placed under the ends of the spacers, which will make it possible not to harm the bark. To achieve a large distance between the shoot and the stem, pull the branch down and fix it in a similar position with a weight.

After 14 days, all devices should be removed from the ficus. From this moment on, the growth of the shoots will be carried out in the right direction. A longer presence of the wire on the plant will cause it to grow into the culture.

How to form a ficus crown by grafting

Grafting is the process of transplanting one culture to another. Such manipulations are most often used in a situation where the ficus was formed incorrectly, as well as in cases of defective crown development.

There are situations when in some areas of the ficus there is not enough branch. To correct this situation, a florist can use grafting, which helps to speed up the process of ficus formation. After a short period of time, there will be no trace left on the plant in the place where the grafting was made. A young shoot will begin to grow in the empty area by this time.

Note! The use of the grafting method allows you to form a plant, as well as combine 2-4 varieties of ornamental crops of the same family.

Below you can find tips from florists who are growing ficus benjamin.

An exquisite plant, with proper care, can become a real decoration of a room. Using the trunk weaving procedure, you can create a unique composition that will surely attract the attention of guests. The tips of florists suggested above will make it possible to avoid the most common mistakes that a beginner often makes.

Video instruction for the procedure:

We have Benjamin's ficus growing for several years, we have never pruned him. Ficus grew into a beautiful tree, about a meter high. He had a beautiful crown, an even trunk. This, of course, is not a bonsai, but, in itself, a very beautiful plant.

Please share your experience, how and with what did you feed the tree and how did you fertilize the earth? Are there any other features? I really want to grow such beauty at home)