The interior, made in any style, is often complemented by houseplants. Ficus is the king of living decor. The process of its reproduction is not complicated. However, there are nuances of cultivating a flower by rooting a leaf. We will tell you how to grow a ficus from a leaf correctly below. 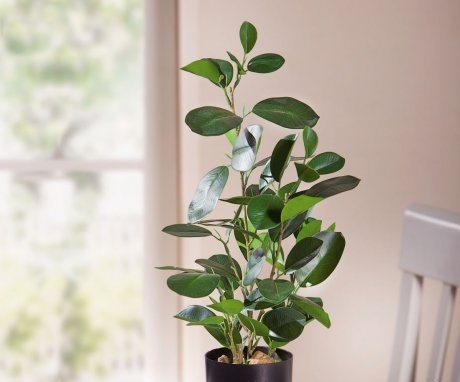 Is it possible to propagate ficus with leaves

Ficus, like most domestic plants, propagates vegetatively, that is, by cuttings or leaves. Not everyone knows about the rooting technology of the second method. At the same time, costs and efforts are practically not needed to obtain a young shoot from a leaf. It is enough to choose a suitable material with an internode fragment. The probability of root germination is high, so experienced growers often use this method to reproduce green beauties.

Reference! Not all types of culture lend themselves to the leaf propagation method. Rooting of some plants is slow, as is further development.

Advantages and disadvantages of this breeding method

Reproduction of ficus by rooting the leaf has the following advantages:

Among the shortcomings, the following factors stand out:

The disadvantages of growing a ficus from a leaf are insignificant, it is quite affordable to get around them if you adhere to the rules for pruning and rooting of biomaterial.

Some types of ficus (for example, Benjamin) take root in water for a long time. You have to wait about a month. 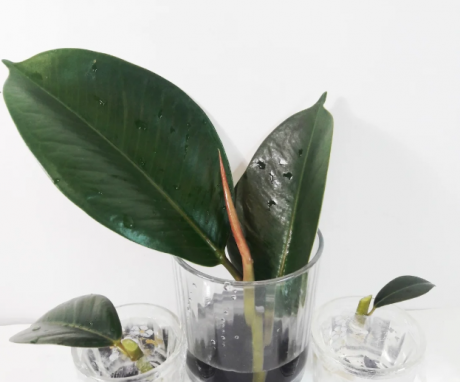 How to grow ficus from a leaf at home

The essence of the method of propagation with the help of a leaf is to find a suitable biomaterial, which is separated from the mother plant and rooted in a specific environment. Planting material of different types of ficus requires individual germination conditions.

It is recommended to cut a leaf from a bush in early spring, when the plant is gaining strength. Recommended months are March, April. The day before the event, the plant is watered abundantly so that all parts are saturated with moisture. The cut is made obliquely, so the roots are released faster. The juice secreted by the ficus must be thoroughly rinsed under running water. Next, the leaf is twisted with a tube, its position is fixed with a thread or twine.

Having lowered the lower cut into the root, the planting material is set in the ground. A thin stick is passed inside the tube, burying it into the ground. In this case, it is important not to damage the leaf and stalk with the sharp end of the stick. Experienced flower growers advise first to install a support, then bury the stem of the leaf in the soil with it.

When working with ficus, precautions are taken - you need to wear gloves on your hands. The secreted juice contains poisonous substances. If it comes into contact with the skin, it will burn.

Rooting of the leaf can be carried out not only in the ground, but also in water. The rules for preparing the cut sprout do not change.

Which leaves to choose

To obtain high-quality planting material, it is necessary to choose a mother plant. Strong healthy ficuses are suitable for this. The sprout is cut from the upper branches or lateral stems. It is important that there is a peephole at the base of the sheet.

Advice! Ficus planting material is taken from young shoots. It is more difficult to separate a fragment from an old formed branch.

The mother plant should show no signs of disease. Otherwise, the breeding attempt will be unsuccessful.

Leaves with or without a heel (part of the cutting) are suitable for reproduction. It all depends on the type of ficus. For example, small-leaved Benjamin is harvested along with a 10 cm cuttings. A sprout with 3-4 leaves is removed from climbing plants. From a tree culture (lyre, rubber ficus), only a leaf with a small fragment of a stiff trunk is cut off. In this case, it must have an intact peephole. The stepchild, according to experts, will not develop into a full-fledged plant. 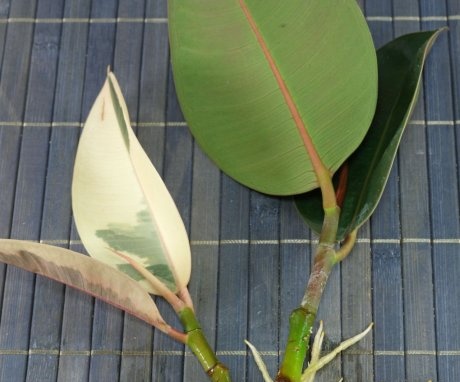 How to separate them and what to do next

The leaf is separated along with a small fragment of the stem with a sharp instrument. Before pruning, it is treated with an antiseptic solution to exclude contamination of the planting material and the plant itself. A pruner or a utility knife will do. The upper incision is made with the blade passing horizontally, the lower one - with a slope of 45 degrees.

The separated part of the ficus is washed under a tap to remove the milky juice. If this is not done, the white viscous liquid will block the access of moisture to the vascular system of the plant. After the shower, the workpiece is kept for 1-2 hours in warm water (25-27 degrees) to release the juice. Use a damp cotton pad to gently wipe the cut to remove white mucus.

Further, the biomaterial is placed in water or a pre-prepared substrate for rooting. The root part develops for a long time. It takes 3-5 weeks until the first fibers appear.

Rooting the leaf is carried out in one of the available ways.

2 leaves with a fragment of the stem are cut off from the mother's ficus. The bottom leaf is removed. After root treatment, the workpiece is lowered into a dark glass container. In this case, the sheet should not be immersed in liquid. To prevent the development of pathogenic microflora, it is recommended to add crushed activated carbon to the water. As the liquid evaporates, a new portion is poured into the container.

It is better to put a container with a sheet in a well-lit place, but without direct sunlight.

After the shower, the leaf is kept in water for 2 hours. Next, the cut is treated with root. You can soak it before planting in powder or let it brew for 10 hours in a stimulating solution.

A pot with a diameter of 10-12 cm is filled with a substrate. It consists of: perlite, sand (the second component can be replaced with peat). After moistening the filler, a folded leaf with a peg is immersed in it. The disembarkation is placed in a warm room. To create favorable conditions, polyethylene is fixed on top of the container. In this form, the sprout spends 1-1.5 months before the formation of the root system. Periodically, the film must be removed to air the plant. Drafts and sudden temperature changes should not be allowed.

Life hack! Instead of film, a cut-off plastic bottle can be used as cover.

How to care for a leaf during rooting

The main rule of care during the formation of the root system is to establish a balance between temperature and humidity. When using the method in water, choose a small container made of dark glass. This is necessary to prevent acidification of the liquid under the influence of ultraviolet radiation. The place is chosen bright, but without direct sunlight.

Periodically, there is a need to add water.With proper care, after 2-3 weeks, a callus forms in the cut area - a whitish cloudy cloud of mucus. After another 2-3 weeks, the root fibers should hatch.

A favorable temperature regime for rooting ficus leaves is considered to be a range of 23-25 ​​°. The minimum reading is 20 °. 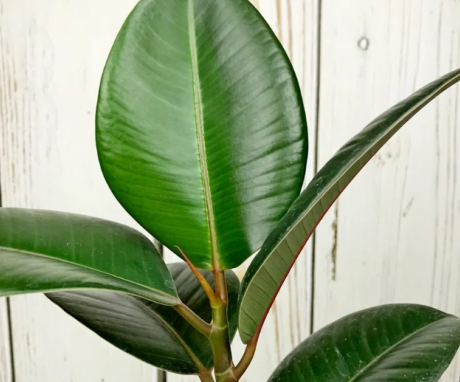 Transfer to a permanent place

After the appearance of root hairs, an event is planned to transplant a young plant to a permanent place. The pot is selected 3-5 cm wider than the one in which the leaves germinated. These are containers with a top diameter of 13-15 cm. The following is used as a filler:

Reference! When choosing the parameters of the pot, they are guided by the size of the root system. Fibers should take up a large proportion of the container.

First, the pot is filled with drainage, after 1/3 of the soil mixture. Next, set the shoot in the center of the container, sprinkle with the remaining soil. Pressing the landing unnecessarily is not worth it. Young ficuses like a loose environment with a neutral or slightly acidic pH. The planting procedure ends with watering. Further care consists in regular irrigation of the disembarkation and airing.

The plant needs replanting every 2-3 years. As we age, the interval increases to 6 years. But every year the topsoil is replaced with fresh soil (turf soil).

Almost all varieties of ficus tolerate shade well. Therefore, it is not at all necessary to choose a place for the pot on the windowsill. If there are no other options for arranging flowers, then it is worth considering artificial shading on the windows to protect the young shoot from the scorching sun's rays.

In the cold season, there is a need for additional lighting. The ideal solution is to install phytolamps.

Rooted plants require a lot of moisture. After disembarking ficus sprayed from a spray bottle and watered at the root as the soil dries. The temperature regime favorable for the normal development of the flower is 20-25 °. In winter, the culture can tolerate lower temperatures - up to 13-16 °. The air should be within 40-60% humidity, at high rates, foliage or fungal infection is possible.

Reference! The ficus needs abundant watering in the hot season. During this period, it is watered until water flows out of the drainage hole. In winter, a transition to moderate irrigation is carried out.

4-8 weeks after transplanting, the plant needs to be fed. Ready-made fertilizers are popular:

In the summer, the plant is fertilized every 2 weeks. With the onset of the cold season, the culture enters a period of rest. At this time, you do not need to feed her.

Young ficuses should be replanted annually. This should be done in the spring. The signal for replanting is the rapid drying of the soil after watering. The root takes up most of the pot, so a new container is chosen with a larger diameter (about 2-3 cm).

The advice of experienced florists will help to avoid many mistakes when rooting a ficus leaf.

Considering all the recommendations, the chances of growing a beautiful plant from a leaf increase many times over. Ficus will always take on an accent in the interior, especially in winter, when the greenery reminds of the summer season.