How to grow and how is it useful for rhubarb?

Rhubarb is a large plant of the buckwheat family with original leaves. His homeland is Central China. Previously grown as an ornamental plant. Now it is bred on an industrial basis.

Features of the structure of the plant 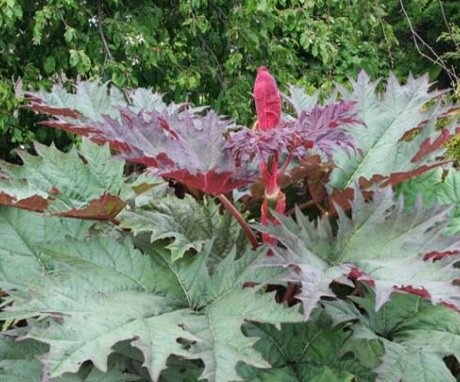 Rhubarb is palm-shaped, medicinal, or pallid-shaped - a perennial plant with a small number of erect stems. Inside they are empty, outside covered with small brown spots. The height of the stem with the peduncle reaches up to 2.5 m, the thickness is 5 cm. From above, the shoots branch out, to the place of separation are attached palm-like-separate leaves with bells near the stem.

Bush rhubarb appear above the ground shortly after the snow has melted from the ground. It looks very unusual, like a ball, often red or purple in color. Gradually, the leaves unfold, and the plant becomes even more beautiful. Root system rhubarb grows every year, becoming more powerful and thicker. She has several "heads", and in a few years her weight reaches more than 10 kg. The color of the root is brown-brown on the outside, bright yellow on the cut.

Below, near the ground, there is a rosette of root leaves. Their petioles are thick, cylindrical in shape. Wide, up to 75 cm in diameter, the leaves consist of 5 or 7 lobes. They grow in length up to 1 meter. The surface is covered with sparsely spaced hairs. They are slightly similar in shape to the leaves of the Canadian maple. The color of the petioles and leaves is green or reddish (Atrosanguineum cultivar), and in young plants, beet-red. Basal leaves are much larger than stem leaves.

Small flowers, white, pink, red, collected in an apical raceme up to half a meter long. They bloom in June after the plant is 2 or 3 years old. During blooming, it is covered with a membranous perianth. It consists of 6 parts, white-pink or red in color. In place of flowers, fruits appear - nuts of a triangular shape with a perianth wing. When they ripen in July, the stalks gradually rise vertically. 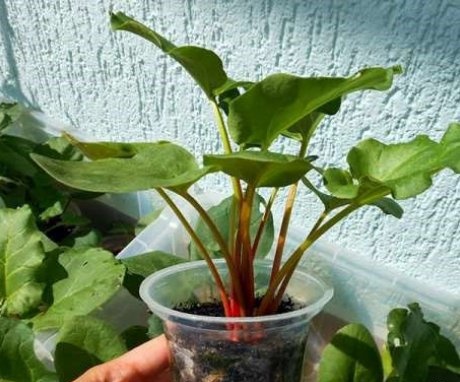 Rhubarb is propagated seeds or by dividing the root. Seeds are sown before winter in frozen grooves or on the surface of loose soil. Until spring, they stratify in the ground, and in the spring, in April, seedlings will appear.

You can sow rhubarb in spring, but to improve germination, it is first kept in water for 12 hours. It is better to pre-stratify specific seeds for at least a month. The soil for rhubarb is prepared in the fall. They bring humus ash, mineral fertilizers... Dig deeply. They dig grooves with a depth of 3 cm with a Fokin flat cutter. Place seeds in them at a distance of 20 cm from each other. Fall asleep with earth.

When the seeds sprout, they are thinned out or planted so that the distance between the bushes becomes about 1 meter.

You can grow seedlings in an apartment on a windowsill or in a greenhouse. Then they are transplanted into open ground.Seedlings emerge spontaneously, from one to three weeks.

By dividing the root, rhubarb is propagated at the age of 3 years. You do not need to dig out the entire root, but cut off a piece with a sharp shovel, setting it vertically. The piece should have growth buds and roots. The place of the cut is sprinkled with crushed coal. 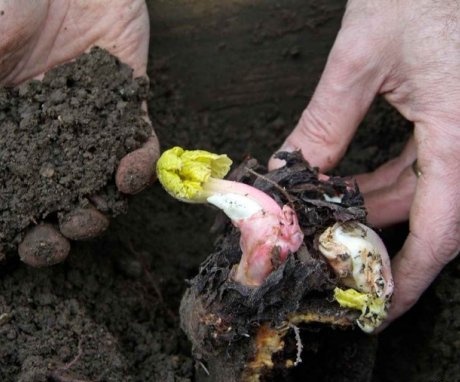 The soil for growing rhubarb should be nutritious, loose, neutral acidity and deeply cultivated. You can deacidify it by adding slaked lime or dolomite flour, increase the acidity with peat, humus from needles. Grows poorly on heavy and sandy soils. To prevent the root from rotting, a drainage layer is laid on the bottom of the pit. Young rhubarb needs a lot of moisture. As its rhizome grows, it becomes more resistant to drought.

Rhubarb grows well in partial shade. In the sun, its leaves grow smaller, their color is not so beautiful. But you shouldn't plant it in the shade either, the leaves will be pale green. The plant can be damaged by a sharp repeated alternation of winter thaws and frosts. It may lag behind in development or even die. Therefore, they do not plant it in lowlands, places where moisture stagnates.

Rhubarb rhizome is best planted in the ground in spring.

If purchased too early, store it in the refrigerator. They constantly inspect, removing rotten parts and disinfecting them with brilliant green or a pink solution of potassium permanganate. Watering, mulching with a loose substrate, sawdust. The root area is covered with the same mulch for the winter. The older the bush, the more mulch it will need. So, for a three-year-old bush, you will need 2 buckets of peat, humus or sawdust. During the summer, watered during dry periods. They loosen the soil, remove weeds, which can drown out young plants. This procedure will improve air access to the roots.

How to properly care for him? 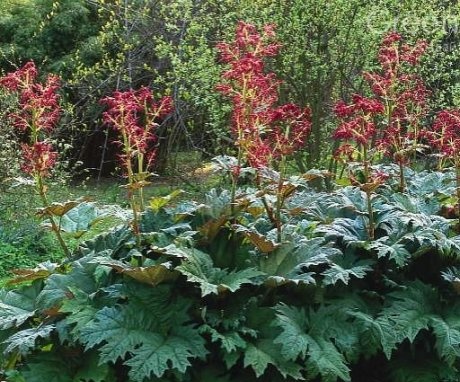 Palm-shaped rhubarb does not require special care. It tolerates frost and summer heat well. Water it, focusing on the weather. At the beginning of the season, more moisture is needed. Adult plants are watered only in drought.

Rhubarb bushes need to be fertilized in the spring with superphosphate, urea and potassium sulfate.

It is not advised to apply fertilizer after each harvest of cuttings, this can lead to soil contamination. Better to add diluted slurry or nettle infusion. If rhubarb is grown for tasty leafy cuttings, the stalks are cut off as soon as they appear. Then the plant will spend all its strength on the leaves and their cuttings.

To make the petioles juicier and longer, they hide the bush in the shade. From a lack of light, the petioles are stretched. When they reach a length of 30 cm and a width of 2-3 cm, cut them off. Stop collecting petioles a month before frost. After the rains, the leaves of the root rosette are examined from below, removing the slugs. They hide under leaves to feast on rhubarb juice.

The bush grows in one place for a long time - up to 15 years (it is not planted because of a too large root).

The bush looks strong and healthy. But he can be affected by fungal diseases:

You can get rid of them by treating with an organic preparation Fitosporin.

The plant also has pests:

It is necessary to handle with chemicals carefully, because the petioles will be used for food. The safest drug is Fitoverm. Dried leaves are cut in autumn. No need to shelter from frost. It can withstand temperatures as low as 34 degrees below zero.

Where is it used and how is it useful? 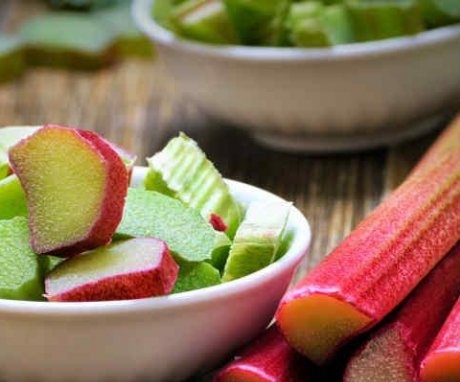 Palm-shaped rhubarb, planted alone, will decorate the garden. It can be surrounded by low, beautifully flowering annuals (geranium, saxifrage) or fernsplanting flower beds in the background.

Thanks to organic acids, young petioles have a pleasant taste.But over time, they become tougher, filling with oxalic acid. You shouldn't eat them.

Raw materials from the rhubarb rhubarb are used for medical purposes. They dig out the bushes at the age of 3-4 years, cut them off. They do this in the summer so that the roots have time to dry out in the fresh air. Dried in dryers.

Medicines made from palmate rhubarb are used to treat the gastrointestinal tract. It has an interesting property: it can have a fixing or laxative effect. It all depends on the dose.

Do not use drugs and fresh parts of the plant for people with acute peritonitis, appendicitis, cholecystitis and intestinal obstruction, gout, inflammation of the bladder.

In small doses, rhubarb increases appetite, improves bile secretion and kidney function. Consumed in powder form, prepared from the root of the tincture. The crushed root is added to the choleretic tea. If it is necessary to cause cleansing of the intestines and duodenum, increase the dose. After this, intestinal peristalsis increases.

Petioles rhubarb palm-shaped is used in cooking. Starting from May, soups and salads are prepared from young leaves. Used for making jelly, candied fruits, pie fillings. After heat treatment, they taste like apples.

We have rhubarb growing along the fence on our site. We use it very rarely, we mainly add it to compotes and jelly. To be honest, I don't really like its taste. Although if you like it, be sure to plant it!

In the village the year before last, before winter, we planted seeds on soil fertilized with manure, rhubarb rose up perfectly in April, grew beautifully. But we looked after him well, weeded him, watered him, gave him mineral complexes. But it is important not to overfeed or oversolder.

At one time I tried to grow rhubarb from seeds, but this did not work, the seeds did not germinate, although I bought them in different places. It also did not work with the rhizome, in our region rhubarb is practically not bred.