How to grow an Emperor Cylindrical in a garden?

Imperata is a species of ornamental plants from the Gramineae family. The most famous is the Imperata Cylindrica, which is actively used by landscape designers. Gardeners prefer to choose the Cylindrical Emperor because of the ease of cultivation and spectacular appearance, which is able to diversify the panorama of the garden. For the special shape and color of the leaves, as well as for their clear arrangement among the people, the culture was nicknamed "Red Lightning".

In natural conditions of growth, the Imperata is known as a weed that grows rapidly, filling the vacant land. The thickets of these cereals are difficult to overcome, and due to their rigid structure, they are not eaten by any animals. As it spreads, the culture displaces all greenery, which makes it difficult for birds to nest, and hard, sharp leaves injure animals.
Today, the plant can be found in almost all warm regions, but the spread of the Impera began from China and Japan. Due to its extensive distribution, the culture is called differently: kogon grass, alang-alang, kazaro, Imperata Reed, Red bloody Japanese grass.
Content:

Appearance of the impera cylindrical 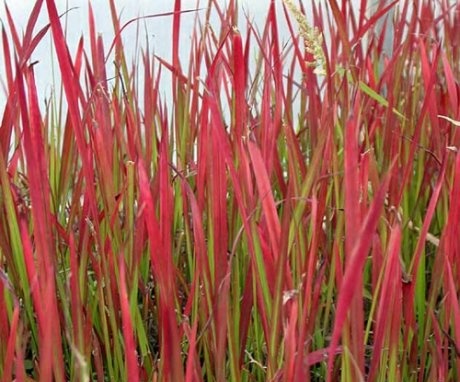 Imperata Cylindrical refers to perennial plants with hard and traumatic leaves. The leaf plates flaunt on tall stems, and because of their shape they are often compared to the blade of a knife.

The crop can grow up to 80 cm in height and look beautiful in bloom - although this is a fairly rare phenomenon.

In landscape design, the "Red Baron" variety is especially popular - a very effective cereal with upright erect leaves, which grows up to half a meter. Young foliage has a bright green color with red tips, the color of which becomes more intense towards the end of the season. As the Emperor grows up, the leaves become completely scarlet, and in the bright sun - almost burgundy. This feature favorably distinguishes the plant among ornamental grasses.

The "Red Baron" is not characterized by flowering and seed formation. But very rarely you can still see its flowering in the form of fluffy silver spikelets, which make an advantageous contrast with the leaves.

How to propagate and transplant a plant 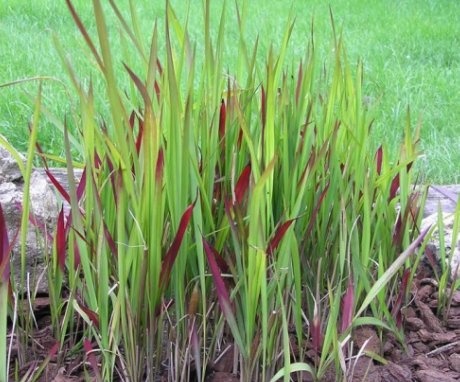 In order for the plant to always remain decorative, it is important to correctly select the area where it will grow and follow the recommendations of specialists:

Reproduction of the Emperor is carried out by dividing the rhizome of adult representatives, which have managed to grow significantly and thinned out in the center. Spring is a good time for separation. To carry out the procedure, you should perform a number of actions:

If the procedure is carried out correctly and the roots of the plant were not damaged, then within a month several more young bushes of the Cylindrical Emperor will flaunt on the site. 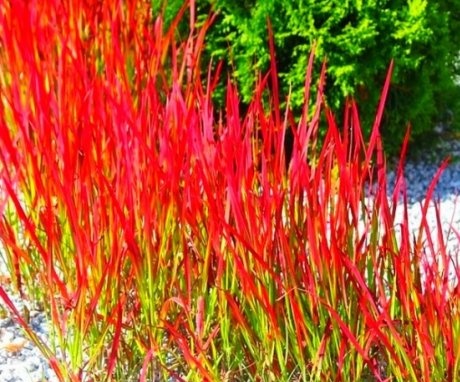 Imperata Cylindrical is distinguished by its unpretentiousness and does not cause problems to its owner. But it is important to restrain the violent nature of the plant so that it does not grow throughout the site and follow several recommendations:

A common problem that a gardener may face is freezing of the crop in winter with a lack of snow cover. If the climate in the region is changeable, then it is advisable to cover the plants for the winter with spruce branches.

When replanting a plant, you need to provide stable irrigation so that the soil is moist for two to three weeks.

This is explained by the fact that it is quite difficult for the Emperor to take root, and moisture helps her to get used to it. In order to prevent root rotting, planting holes should be equipped with high-quality drainage, which will remove excess moisture from the plant root system.

The emperor as a garden decoration 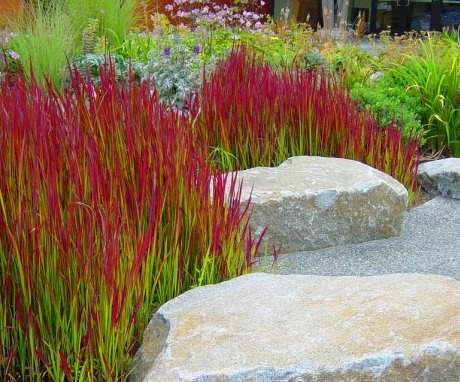 When planting the Emperor in the garden, it should be remembered that with a rapid growth rate, the plant develops slowly and the colorful cereal will reach its greatest decorative effect only by the fourth year of life. But this is more a plus than a minus. After all, the culture is gradually changing its colors and every year the garden will look individual.

In addition to the decorative qualities of the Emperor, it also has healing properties.

Decoctions of its rhizomes are used by folk healers to treat liver, stomach and kidney diseases, as well as the respiratory system, tonsillitis and colds. Therefore, planting the Emperor in a garden plot, flower growers also acquire a universal home first aid kit.

When decorating garden plots with decorative cereals, you can ensure their colorfulness from early spring to late autumn. Indeed, even when dried, the cereals do not lose their decorative effect. And the versatility of the application is able to fit perfectly into any design, with various motives.