ABOUT geraniums known as a houseplant, which is quite popular among flower growers. But perennial flower species adorn gardens and parks without requiring special care and conditions for growth. Geranium bushes are used by designers to create flower arrangements on the territory of a suburban area.

Hundreds of varieties of geraniums have been bred by breeders. These are both herbaceous representatives of the flower and semi-shrubs. In temperate climates, there are annual and perennial decorative crops, representatives of the Geraniev family. It is easy for a beginner to grow flowering plants. You can choose the types of geraniums that are suitable for the conditions of the climate, site.

The best types and varieties of garden geranium 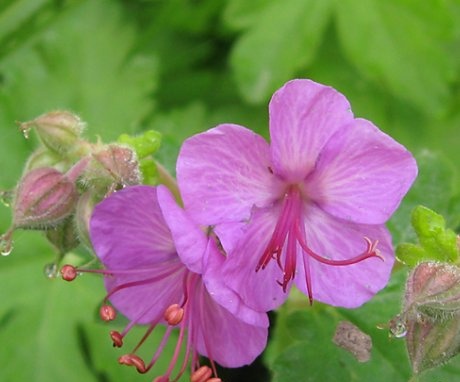 An unpretentious perennial garden geranium plant is valued for its success in survival in different climatic conditions. It grows well both in the shade and in the sun. The bushes grow rapidly, decorating the area with bright fancifully carved green leaves, large inflorescences or many small flowers of various colors.

Among the types of geraniums for the garden, those that correspond to the location of the site, the tastes of the owner are chosen:

When choosing types of geraniums, they rely on different periods of their flowering.You need to know what soil the plant prefers, how it reproduces. 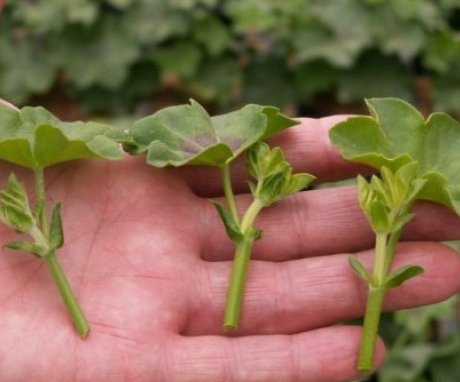 Seeds geraniums are rarely propagated, because this process requires the ability to select high-quality seed. In order for a seed to sprout, one must be able to determine its maturity. Some types of geraniums scatter seeds themselves in the fall.

If you decide on a seed reproduction method, then they begin to plant seeds in the ground in October or April. After winter, autumn plantings will give amicable shoots, if the conditions for growth were favorable. Geranium will bloom only next year. Store-bought seeds are planted in containers for seedlings, placing containers in a greenhouse. After growing, the bushes are determined to a permanent place with a distance of 50 centimeters from each other.

The plant quickly takes root if there is a lot of light on the site, and in the ground there is food, moisture and air.

In order not to cross the varieties of geraniums, they prefer to propagate by cuttings. Prepared branches are planted in soil consisting of sand and nutrient mixture. After rooting, they are placed in the holes and covered with nutritious light soil. It is easy to get cuttings with a viable root system by bending the side shoots of the bush and covering them with soil at the base. You can dig up the mother bush and separate the parts from it with the root, planting them separately. In any case, during reproduction, it is necessary not to damage the rhizome by planting it along with the layers.

For planting ornamental crops, sunny places are chosen. The plant prefers soil that is loose, nutritious, with neutral acidity. Although there are species that grow well in acidic soils. These include blood red geraniums. The planting of the bush is carried out in prepared holes with a distance of half a meter from each other.

Recommendations for the care of geraniums 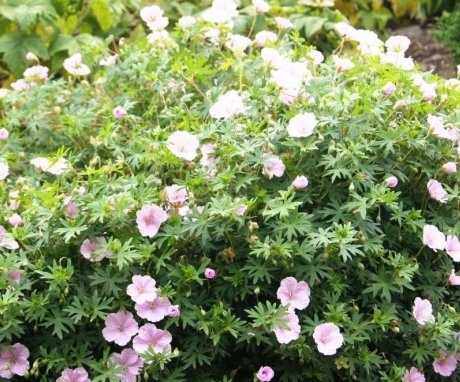 There are few requirements for the care of perennial garden geraniums: 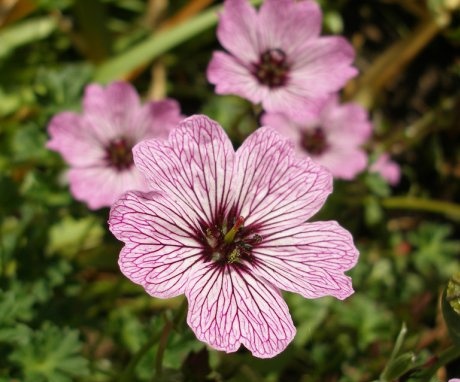 Despite its unpretentiousness, garden geraniums can die due to lack of sunlight. If the bushes grow poorly, the leaves wither and turn yellow, then the plant is urgently transplanted. Waterlogging of the site, waterlogging of geranium plantings is also fraught with irreversible consequences for ornamental culture.

Perennial grows poorly due to fungal infections. Fungus powdery mildew causes the appearance of white bloom on the leaves. Gray mold on leaves and stems is associated with rot. Rust appears as red spots on the leaf plates.

You can fight the disease by spraying with fungicidal preparations.

From pests, aphids attack bushes, drawing sap from plant tissues. The danger is the whitefly, its larvae. The appearance of nodes on the rhizomes of a plant is associated with damage nematodes... The elimination of parasites occurs by treating geraniums with insecticidal agents such as Actellik. A solution of laundry soap and tobacco dust will also help.

The use of geranium in garden design 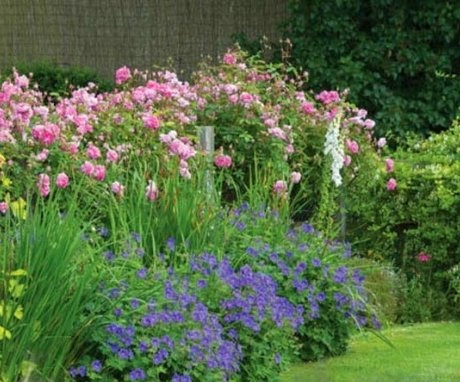 On a plot of territory close to natural conditions, on an alpine hill, in rockeries, creeping bushes of ornamental culture will fill the voids between stones, evergreen shrubs. You can use garden geranium where other ornamental plants do not grow well. The tenacious rhizome of perennials will help to strengthen the slopes, the shores of the artificial pond. Geraniums are easy to care for and are an indispensable part of the landscape in the garden.

Such a beauty will decorate any front garden. I had geraniums for some time, and for a year everything dried up due to a very hot summer and I didn't plant it again. I will definitely plant it this year.