What is clover as a siderat, what is it used for

When growing crops, soil fertilization is of great importance. For this, not only organic and mineral fertilizers can be used, but also green manure.

The latter make it possible to make high-quality and inexpensive feeding. For this purpose, you can use clover as a siderat. 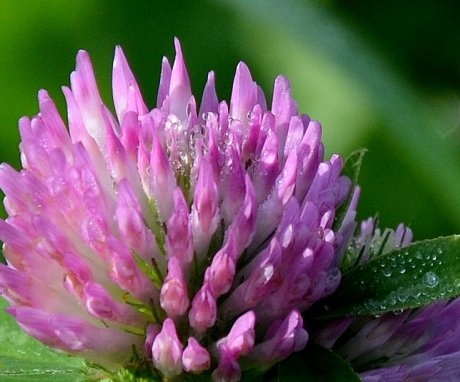 Features of using clover as a green manure

This plant, as a precursor, has a beneficial effect on the development of many agricultural crops. These include berries eggplant, cucumbers, cabbage, onions, lettuce, peppers, various root vegetables and many other plants.

However, there are exceptions - legumes. Peas, beans, the beans should be planted no earlier than four years after the clover has grown on the site.

There is another way to use this green manure - planting between fruit trees in the garden. A strong layer of turf retains moisture well, protects the roots from sudden temperature fluctuations and helps supply trees with nutrients.

Clover is effective when used for soil preparation. He has such advantages:

The use of this plant also has certain disadvantages:

It is usually damp where it grows. These conditions attract slugs and snails, harming the surrounding plants.

All types of clover, which are described below, require more than a year for greening. Red needs to be grown 2-3, pink - 6, and white needs 20 years.

It also has the names: Amoria creeping or White Kashka. This perennial plant has a strong tap root system. The stem is creeping. It spreads by taking root in the nodes. Tripartite leaves grow on long roots. In some cases, their length can be up to 30 cm.

Clover heads are spherical. Their color is most often white, but sometimes pink. Fruits appear in late June or early July. They are flat, oblong beans. In each of them, you can find 3-4 seeds of orange or gray-yellow color. 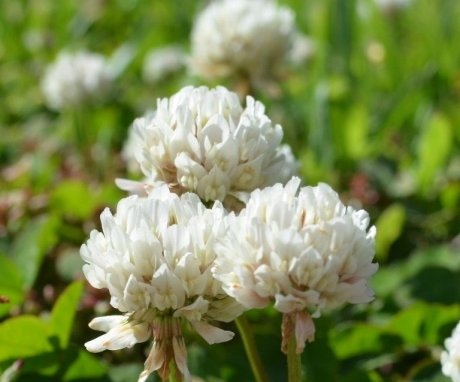 This perennial plant can grow up to 15-55 cm. Red meadow clover has a rising stem. The leaves have a trifoliate shape. The capitate inflorescences are loose. They are pink-red in color, sometimes it can be white. Fruits appear in September-October. They are single-seeded beans.

This species is hybrid. It is a perennial herb. Its height is 30-80 cm. Shoots are tubular ascending. The leaves are inverted, ovoid or oval in shape.

Dense terry inflorescences. They have a light pink color in spring, and by the end of summer you can see a brown tint. The fruit has a flat oblong shape. Ripening time is in late summer or early autumn. It contains 1 to 3 dark olive seeds.

Clover can be sown throughout the season from early spring to late fall.

If planting occurs in October or November, you must do it at temperatures less than 15 degrees. Otherwise, seedlings will appear that will not withstand the winter frosts and will die.

How to plant clover as a siderat

This plant grows well on podzolic, clayey or peaty soils. Sowing is done as follows:

After sowing, it is recommended to compact the soil (for this, it can, for example, be rolled over).

When growing clover, there is no need for complex care. In the first year, regular watering is necessary. It is recommended to do it using a hose with a fine mesh nozzle. During the season, you need to fertilize with mineral fertilizers once or twice. This will help make the greens appear lush and silky.

While the clover has not yet grown, it requires regular loosening of the soil and weeding from weeds.

In order to be able to mow a clover, it must grow for at least two years. It is repeated several times during the season. The first mowing takes place at the time when the buds begin to form. This usually happens in July or August. At this time, clover is most rich in nitrogen.

The last mowing should be done in the fall at such a time that before the winter cold the clover has time to restore its aboveground part.

In the case when the sowing was carried out in August, the clover is left to grow until the onset of spring. In this case, they will need to be cut to the root in April or May.

It must be remembered that if a lot of mown greens are used for fertilization, this can lead to soil acidification. Before starting treatment, it is necessary that the grass has dried for several days.

The beveled clover is first left on the ground and chopped finely with a shovel blade. Then it is moistened with warm water or a fermented herbal solution is used for this purpose. Thus, an environment will be created in which microorganisms can act to ensure the decomposition of grass residues.

The leftovers are left for 2-3 days, then a layer of garden compost with a thickness of about 1.5 cm is poured on them. After 10-15 days, depressions are made in the rotted mixture and the main culture is planted.

Sometimes the cut and cut plant is dried in the sun for several days, and then it is mixed with the top layer of earth. 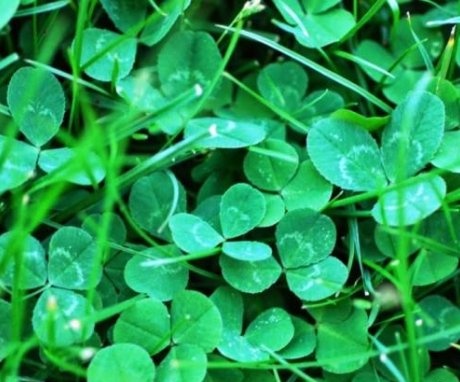 When and how to bury

The cuttings can be used in several ways:

Green manure is buried only in the latter case. However, this should not be done immediately after mowing. In this case, the abundance of greenery can acidify the soil. Buried in a few days after the cut clover dries up.

When using the plant as compost or mulch, it is left on the surface of the ground.

Clover is not only able to improve soil fertility, but also protect the plant from weeds, help nourish fruit trees in the garden, attract pollinating insects, and much more. In order to apply it, you need to know the characteristics of growth and use.

It turns out that if you plant clover on the site, then you cannot plant a garden for two years. Therefore, it is better to plant this green manure not over the entire area, but on a small part. Gradually, over several years, improving the soil of the entire garden.

In my opinion, this is akin to planting lupins in the garden.No, they are both beautiful and useful. But then you can't get rid of them, but they scatter in an instant. So here too - somehow my clover grew by itself. And how I then suffered to lime it. What is the point of planting siderat in order to get rid of it for a long time and painfully?

Clover as a siderat is quite an interesting option, given the unpretentiousness of this plant. I think this plant is suitable for most regions of our country, and the clover itself can be useful as animal feed.