One of the most beautiful indoor plants is Clivia, especially during the flowering period. In general, it is not difficult to master the agricultural technology of culture. However, mistakes made in care have a negative effect on the growing season of the flower, because of which it ceases to release bright inflorescences.

What if Clivia isn't blooming? The article describes common causes and ways to eliminate them. 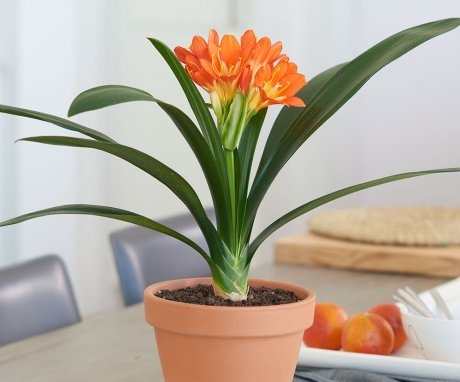 Clivia does not bloom - possible causes

Clivia's inflorescences are of different colors: yellow, white, orange. They seem to gather in a bunch on the peduncle's arrow. It is a real pleasure to watch the blooming flower. If this phase of the growing season does not occur, the reason should be sought in the following factors.

The lack of flowering is observed in a young plant that was obtained from seeds. The formation of the first inflorescences occurs only in the fourth year of the flower's life. If layering was used for reproduction, then the release of the first arrow occurs earlier (in the second or third year).

They stimulate the flowering period with a long dormant period (from October to March). But first, the bush is fed with potassium-phosphorus fertilizer. As soon as a peduncle appears on it, the pot is moved to a room with a temperature of 18-19 degrees. Further, conditions are created that are identical to tropical summer.

Experts believe that one of the main reasons for the lack of flowering is the violation of the biological cycle of Clivia. The period of ejection of the peduncle falls on the winter months. To create favorable conditions, it is necessary to set the temperature regime in the room, corresponding to the tropical winter. Throughout October, November, December, the flower is kept in Spartan conditions:

Clivia will not bloom without a dormant period, when kept in a warm room, with abundant watering.

At the end of the rest, the bush is washed with warm water under the shower, the intensity of irrigation is gradually increased, and seasonal fertilizers are applied. If you activate the ejection of the peduncle as early as possible, then there will be time for the organization of a second dormancy and summer flowering.

Reference! Before each flowering period, the plant should have a three-month rest, organized in compliance with the conditions of a tropical winter.

Clivia's growing rules do not contain complex activities. The lack of flowering can be triggered by their violation. Common mistakes include:

In rare cases, plant diseases are the reason for the lack of flowering. The period of flower stalk release and bud formation falls in the winter months. At this time, the activity of insects decreases, a stable temperature regime excludes stressful situations. But keeping an eye on Clevia is still necessary. Any pathological processes can interfere with budding.

If narrow stripes resembling rust appear on the leaves, most likely the plant has a fungal infection. The bush must be treated with Oxyhom. When the leaf dries up and deforms, suspicion falls on mealybugs and scabbard. Parasites feed on the sap of the flower, thereby disrupting the movement of sap through the vessels.

After identifying insects, you need to remove them mechanically, wash the leaves of the plant with a soapy solution with a small amount of kerosene or alcohol. If the measures do not work, the bush is treated with insecticidal agents. 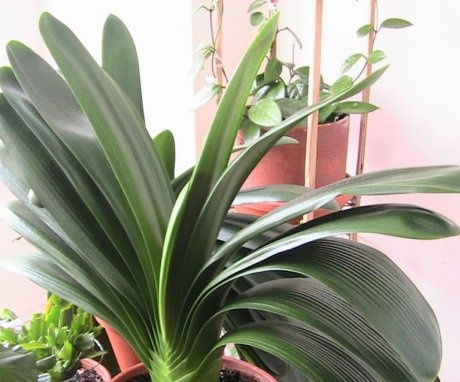 When Clivia should bloom

The flowering period begins after a dormant state. From about September, the flower begins to be watered less often, by the end of the month, irrigation completely stops. The temperature regime in the room or in the area where the pot with the plant is installed is kept within 10-14 degrees.

Clivia's rest is needed to strengthen the root system, restore strength and energy, which will be required during the ejection of the peduncle and the formation of buds.

Reference! During the dormant period, the flower is not watered. However, you need to regularly monitor the condition of the leaves. If they have faded or begin to fall off, the plant is irrigated with a small amount of soft water.

Around mid-January, the plant wakes up and begins to actively develop. By the end of the month, a peduncle appears at the base of the leaves, which indicates the beginning of flowering.

Clivia blooms during the winter months. With the correct organization of the dormant period, the culture may bloom in summer.

What conditions does she need for this?

The process of releasing a peduncle and tying buds directly depends on the conditions of Clivia's keeping. Mistakes in agricultural technology will not allow you to enjoy the natural beauty of a blooming beauty.

The conditions in the room where the flower grows should be appropriate for the tropical climate. Among the main factors that have a beneficial effect on the plant:

What to do to make the flower bloom

The main condition for the flowering of Clivia is the correct organization of the dormant period. Its duration depends on the age of the plant. Two months is enough for a young culture, for a more mature one - at least 3 months. Since September, watering is gradually reduced, and after that they completely stop moistening the soil. The temperature regime is also changing.

Attention should be paid to the roominess of the pot. The flower does not enter the flowering period also because the roots are constrained. Clivia does not like anxiety, so you need to carefully transfer the bush to another container. Do not free the roots from the soil, you can damage them. It is also better to avoid frequent change of location.

Watering is needed moderate, but such that the soil constantly evaporates moisture. Irrigation is carried out with warm water. To make the liquid soft, it is recommended to boil it first.

In winter, it is quite difficult to create favorable conditions with the heating system turned on. Radiators dry the air, the temperature is difficult to reduce to the desired mode. It is ideal to use the room on a glassed-in balcony or loggia. In a private house, you can use utility rooms, greenhouses and a winter garden.

Eliminating the reasons why Clivia does not bloom

Measures to eliminate interference, due to which Clivia does not throw out a peduncle, are carried out depending on the reasons identified.

Timely introduction of dressings provides intensive bud formation and long flowering. During the growing season, Klivia should be fed 1 r. in two weeks. The culture responds well to organic matter and mineral fertilizers, therefore, it is recommended to use both types of nutrient mixtures alternately.

When choosing ready-made formulations, preference is given to fertilizers containing phosphorus and potassium. It is these elements that are essential for the flowering of Clivia.

Reference! Nitrogen supplements are important for growing green mass. They are used to enhance the growth of a young plant. Nitrogen has no particular effect on the ejection of the peduncle and budding.

Clivia does well in moderate temperatures. In the cold season, in the room where the flower pot stands, a stable regime is established within the range of 14-16 degrees. During the flowering period, the temperature rises to 18-19 degrees. In summer, the plant is taken out into the garden, choosing shady areas under the dense crown of trees or shrubs.

The flower needs good lighting, but the light should be diffused. When choosing a place for a pot with a culture, you should stop on a windowsill or balcony located on the north or west side. In winter, to prevent freezing, Klivia is placed in a bright room.

The flower needs abundant watering from spring to autumn. Since the end of September, the intensity of irrigation has been significantly reduced, or completely stopped until January-February. When the air temperature rises above 20 degrees, humidify daily in moderation using a watering can or a spray bottle.

When transplanting a plant, the pot is filled with a mixture, which includes: leafy earth (4 parts), sand (1 part), turf soil (8 parts). Sand or gravel is first added to the bottom to create drainage.

You can determine the need for a clivia transplant by the roots crawling out of the pot.

Fertilize a flower in the first year of life 1 p. in 1-2 months. From the second year, top dressing is applied every 2 weeks. Nitrogen compounds are used to stimulate growth; potassium-phosphorus fertilizers are more suitable to activate flowering. 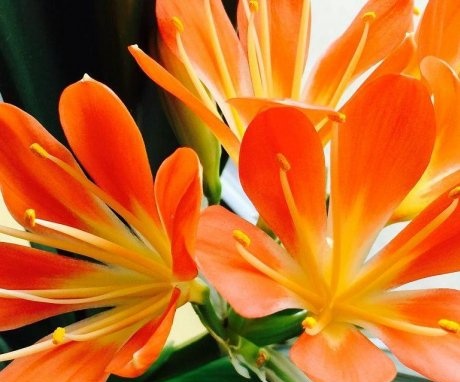 The best stimulation of Clivia to bloom is proper care and timely processing. The best helpers in this matter are advice from experienced florists.

With proper care, Clivia will delight the eye with beautiful flowering for more than one year, complement the interior with bright colors.

Watch a video on how to make Clevia bloom:

Will the flower dry out with such a long-term content without watering, and in very low light? In addition, it is simply unrealistic to create a temperature in the room of +12 degrees Celsius. We have a temperature in winter, about +20 degrees C.

I just put the clivia in the closet in the hallway for a couple of months or more. I doubt that the temperature was 12 degrees, also most likely about 20. It was once that only in May I remembered about the flower. I felt so sorry for him, the poor fellow in the dark and had already released an arrow with buds. Nothing has ever dried up. Clivia has always bloomed profusely.

Now I understand why my flower did not continue to bloom ... I transplanted my beloved Clivia with an arrow shot. And by the way, if I live in an apartment, and not in a private house, can I rearrange it from the sunny side to the north? Doesn't it hurt?