Orchid aerial roots: what to do and how to care for them

Since there are not always enough green areas in cities, residents are trying to plant more flowers in their apartments. They decorate the interior of the room and purify the air by saturating it with oxygen.

Orchid is considered a fashionable and popular indoor flower. She needs special care.

The appearance of various metamorphoses with a plant often causes a misunderstanding among flower growers: what to do with aerial roots in an orchid. 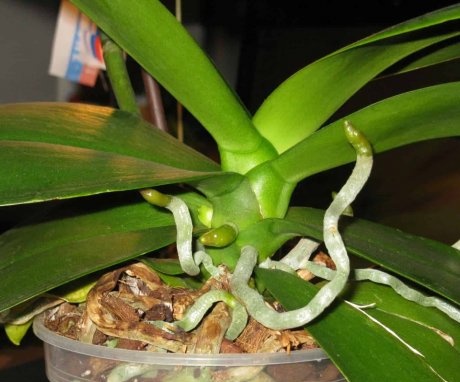 Aerial roots are the root portion that grows on the soil surface. They emerge from the soil in a pot or form from stem nodes on the stem. Sometimes the orchid grows overgrown with aerial roots very densely, but there may be very few of them.

The roots of the flower are responsible for fixing the plant in the selected area. After all, orchids do not grow in the ground, but on trees. The roots also supply the entire plant with moisture and nutrients.

Aboveground roots of a plant often appear. This does not mean that he became cramped in the pot, it was just that the time had come for the development of air outlets.

How do they look

These roots do not improve the aesthetic appearance of the plant, but nothing should be done with them - the natural development of the plant is taking place.

In appearance, the air roots are tubular or flat processes.

If they do not have enough moisture, they have a silvery color, then they turn gray and whitish. In this case, it is required to water according to the rules - put the flowerpot in a container with water. After it, the color of the roots turns bright green - this is a sign of a healthy flower and root system. Aerial roots should be soaked in water for a couple of minutes or sprayed with water.

The roots emerging from the soil are similar to standard orchid growths. Their difference lies in the fact that they grow in other places. In structure, it is slightly thicker than underground, but they are the healthiest, because they appear in natural conditions of growth of orchids.

Domestic flowers grow on a substrate of pine bark and sphagnum moss, which is close to their natural growth on trees. Over time, the mixture degrades and requires replacement. The roots are exposed to infection and rot.

The plant is looking for a new source of moisture and nutrients, so its roots twist and unfold in different directions. Many remain in the substrate and some become airy.

The structure of these orchid roots is represented by the following layering:

Velamen is like a sponge - it is similar in structure to it, it absorbs well and gives off moisture well.

What are they needed for

The health and development of a plant depends on the condition of the roots. Air branches perform the following functions:

In home growing, some of the functions of these branches are simplified.For example, they do not need to be fixed on tree branches, because they are in pots.

Reasons for the formation of aerial roots

Numerous branches of roots appear in an orchid for the following reasons:

If there are few air branches, no measures should be taken. It is necessary to revise the conditions for caring for the plant and the irrigation scheme. If there are too many roots and they have begun to rot or become infected with a fungus, then emergency measures must be taken. 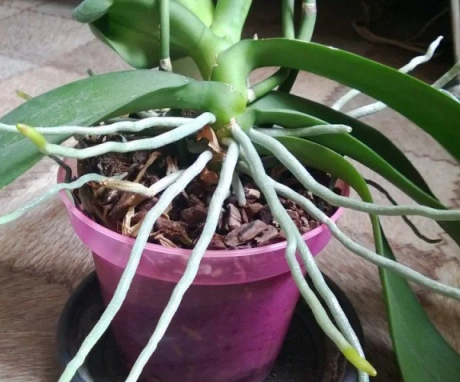 What to do with them

If too many root branches have formed on the surface of the soil, you need to identify the cause of their appearance and begin to eliminate it. Often the flower itself shows the cause of multiple root formations. You need to take a close look at it and quickly take action for changes in its development.

What to do if there are too many of these roots

If there is discomfort in the plant and its owner from multiple aerial roots, it needs to be transplanted into a larger pot. It is impossible to remove them if they are not sick and not damaged, since this way you can kill the flower itself.

The size of the pot is 3 cm wider than the horse system. You should not push the roots into the substrate yourself, they will independently find a place convenient for themselves. The substrate must be replaced with a new one. A large container will cover the above-ground roots, which will solve the unpleasant problem.

The orchid sometimes needs to be transplanted into a new container. If this is due to the huge branching of the air branches, the growers do not know what to do. Given their volume and condition, you can act in different ways:

The cut sections must be dried and treated with a disinfecting solution. When there are few aboveground roots, they do not need to be removed or buried in. If you take good care of your orchid, they will find a comfortable place for themselves.

How to trim them

Sometimes roots need to be removed if they are injured or diseased. If the plant is cramped, you need to cut off some of the air branches and transplant into a larger pot.

It is recommended to prepare the tools before starting work. The pruner or knife must be sharp. They need to be disinfected by moistening the blade with chlorhexidine, vodka or cologne so that no infection gets to the cut.

You need to trim in stages:

If these funds are not available, you can sprinkle with ordinary cinnamon, since it is a natural antiseptic. Then transplant the flower into a new container with a renewed substrate from pine bark and sphagnum moss. Provide illumination of the plant for 20 hours a day, supplementary lighting with fluorescent lamps.

How to help dry air roots

Why do air branches begin to dry? This question presents the following reasons:

The dried out processes must be gradually brought back to normal. Do not put them in a bowl of water, this will aggravate the situation. To gently relieve stress from the plant, it must be watered with the whole epin. It relieves stress and activates the defenses of the plant.

As the roots dry out, do it again. Then dry and dip the pot in room temperature water. After the roots have dried, immerse them in water again for 5 minutes. Then water as usual and let the roots dry. Resuscitation lasts more than one day, but the plant will benefit from it. 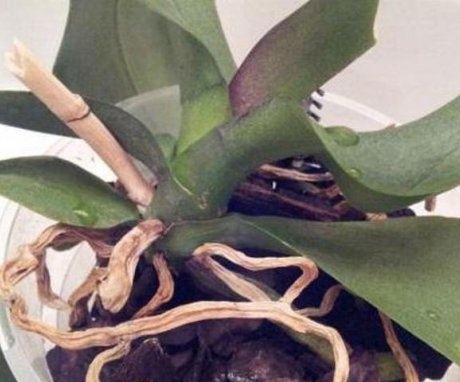 Newbies in floriculture try to give the flower a presentable look and make the following mistakes:

The flower requires careful self-care. For example, it only needs to be watered from a sprayer. If a stimulant is added to the water, then they should be irrigated with roots and leaves, being careful not to fall on the peduncle.

If aerial roots spoil the aesthetic appearance of the plant, then you can simply prevent their formation. You can do it this way:

It is necessary to choose transparent containers for it - this will enhance the process of photosynthesis. Occasionally, areas with a darkened brown crust appear on the aerial roots. No need to panic - due to excessive feeding with mineral fertilizers, salt deposits form on the root surface.

These are brown spots, but at the same time, gray spots indicate burns when watering with too much fertilizer. Such damage is not dangerous for the flower, but it is recommended to do feeding less often and with less saturated solutions.

Growing an exotic orchid at home requires some knowledge and skills. The plant has good vitality and, if a problem occurs, it should not be scrapped. It is necessary to pay more attention and care to the flower, and it will be reborn, allowing the owners to fully enjoy its magnificent flowering.

Our phalaenopsis orchid also has aerial roots. There are not many of them, but they are. In the photo in the article, the orchid has 6 leaves, which means that it has excess moisture when watering. This flower should have 4 leaves, if less, there is little moisture, and more means there is a lot of water. We do not spray the orchid, I read that aerial roots can take moisture from the air.

Maybe I'm not doing it right at all, but I don't do anything with orchids at all and try not to even move them. They grow and bloom for a whole year, I rarely transplant and then only if necessary. There are few aerial roots. And the side of the world is also important.