How to propagate ficus? The most effective ways

Ficus - a plant of the mulberry family. Its historical homeland is the tropics of Asia, Africa and America. At home, this is a low tree that decorates the house thanks to its beautiful elliptical leaves. 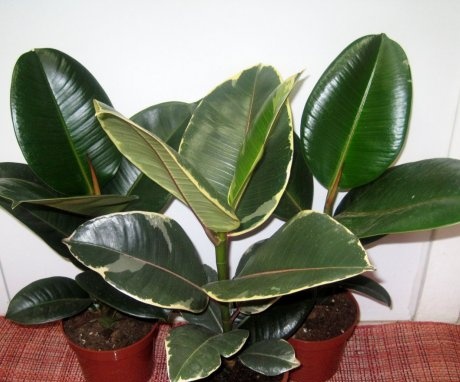 Most often now, Benjamin's ficus and rubber are grown in houses. At first glance, they have little in common:

The height of the ficus in the room reaches 2 meters. (In the wild, this can be up to 30 m. A large number of aerial roots give it an original look.)

Propagation of ficus by cuttings 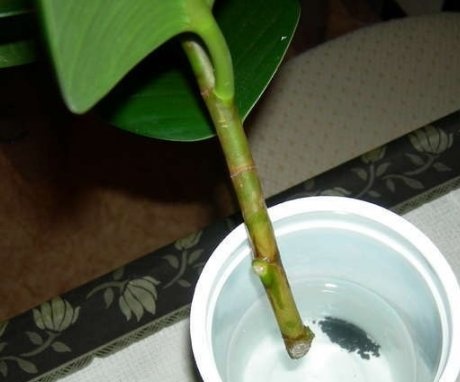 Best to root stalk ficus from March to September. For this you need:

It is best to use woody or semi-woody shoots with two or three nodes for rooting. The length of the cutting is from 5 to 10 cm. Moreover, they do not have to be cut from the top. You can take a long shoot, cut it into pieces and get some young plants.

The bottom cut must be made at an angle of 45 degrees.

Milky juice will immediately begin to stand out from the cut site. In order for its release to stop, the cut cutting is placed in warm water for an hour. The cut site is treated with "Kornevin" or another stimulator of root formation. A loose substrate is prepared: a mixture of perlite and peat. A stalk is planted there, watered.

The room temperature should be around 25 ° C. The soil should not dry out. After 1.5 months. the stalk must take root. If there is a stalk on which there is only one leaf, all operations are carried out in the same way, but the leaf is folded into a tube and fixed. Evaporation in this case will be minimal. When multiplying variegated varieties of rubber ficus, the bottom heating of the pot, covered with a film or glass jar, is used. But the result of such rooting is still not always happy.

Ficus propagation by layering and leaf 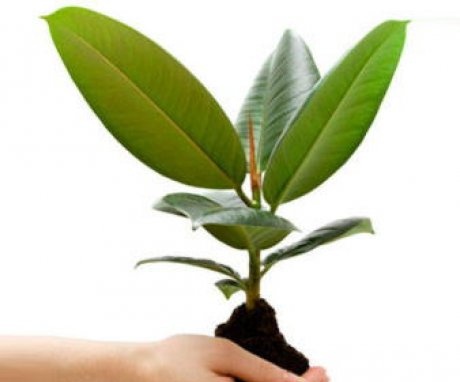 Variegated varieties are best rooted with air layers. To do this, in the place of the intended cut, a circular incision is made at a third of the width of the branch. So that the edges of the notch do not close, a match is inserted into it.The place of the incision is covered with moistened sphagnum moss, covered with plastic wrap. They are fixed to make a mini-greenhouse.

Rooted in this way in spring and summer.

Through the transparent film, you can clearly see what is happening inside. As soon as the roots become visible, part of the stem is cut a couple of centimeters below the resulting roots. The seedling obtained in this way is planted in the ground.

Some sources say that ficus can be grown from a leaf, like Saintpaulia. They say that it is enough to set a leaf of rubbery ficus in water for it to take root. This can happen, the roots will grow, and may even grow for a long time. But it will not be possible to get shoots out of it and grow a new tree. To do this, you need a piece of stem, "heel". In this case, reproduction is similar to growing from a cuttings. 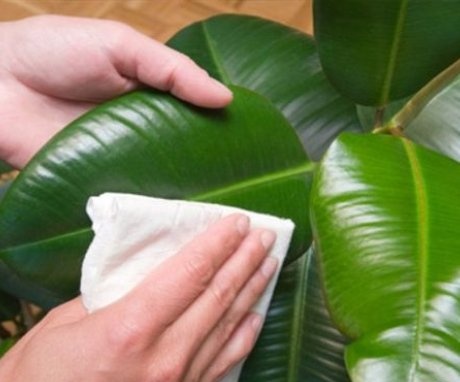 Ficus is considered an unpretentious plant. At the same time, he is quite finicky. If the ficus doesn't like the place, it can throw off all the leaves. Therefore, it is best to place it away from batteries and heat sources.

Direct rays should not fall on its leaves. Better to install it a few meters away from windows and batteries. Dark-leaved ficus varieties require less light than light-leaved ones. It is unacceptable to install it in drafts. The location must be permanent.

Temperatures below 12 ° C are detrimental to ficus.

The optimum temperature in winter is not lower than 15 ° С, in summer from 20 to 25 ° С. Ficus, like any tropical plant, loves high air humidity. To make the leaves feel like at home, spray them with water at room temperature once or twice. If the crown is very thick, air can become stagnant in it. To prevent this from happening, shake the crown once a week. Thus, air passes between the leaves.

Ficus Benjamin is transplanted no earlier than 2 weeks after purchase. During this time, the plant adapts to the conditions of the apartment. Prepare a universal soil of medium acidity. Be sure to lay a drainage layer on the bottom of the pot. Subsequently, they are transplanted once a year, in the spring. If the leaves do start to fall off, don't throw it away. This is a transplant reaction. In such cases, continue to spray and water sparingly.

Elderly rubber ficus is transplanted every 2-3 years. The size of the pot is increased each time by 4 cm in width and 6 cm in depth. If the ficus is very old, it is better not to replant it, but to replace the topsoil (3 cm) with a new nutrient layer of soil.

Ficus is transplanted into a new pot.

Leaves can also fall off because the soil is too wet. If the smell of mold is heard from the pot, the ficus is urgently transplanted into another dish, after drying the roots a little.

If the rubbery ficus grows to the ceiling, its top is cut off. You can plant it in the same pot. Pruned in early spring, otherwise only the top growth point will grow. Pruning is carried out after 5-6 internodes several times in a row. The juice is washed off with water. You can induce the growth of side branches by tilting the trunk to one side and fixing it.The upper kidney at this point will grow. Then the main barrel is released. A third of the thickness can be used to pierce the barrel, starting from the top. 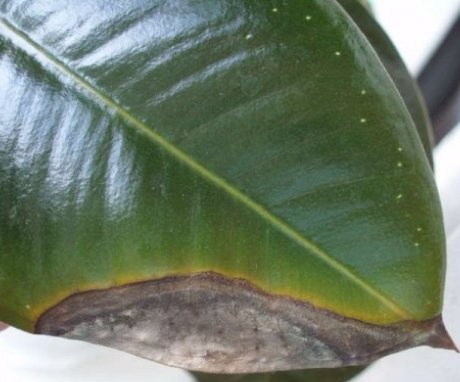 Pests can spoil the appearance of the leaves:

The ficus leaves are carefully examined. If a cobweb has appeared on the trunk, and black dots on the leaves, then spider mites have settled on it. It is necessary to lower the air temperature, rinse eggs and mites with cold water for five days in a row. Then they are treated with insecticides. In the same way, you need to fight with scale insects. You can use tobacco dust (4 tbsp. L.) Diluted in a liter of water for processing.

Ficus is affected by fungal diseases - anthracnose and cercospora.

Anthracnose appears as dark brown spots that later develop into ulcers. If the disease is not combated, this leads to the death of the plant. Cercosporosis appears as black dots on the lower part of the leaf. The diseased leaves are cut off, the plant is treated with a fungicide. Do not spray, water less, ventilate the room. The leaves can be damaged by dropsy. Cork growths appear on the underside of the leaf. The disease is caused by over-watering.

Ficus rubber cleans the air in the room from harmful chemical compounds, improves energy. Preparations from sap and leaves are used to treat "female" diseases. Compresses are made from the juice, which treat joint diseases and hemorrhoids. Rubber ficus juice can cause dermatitis, allergies due to the presence of alkaloids and enzymes in it. It is dangerous for asthmatics to grow ficus in the room. It can provoke an attack of suffocation.