The appearance of the yellow-fruited tomato is very attractive. The tasters highly appreciated its taste. In care, the plant is unpretentious. These arguments are a powerful argument in favor of choosing a promising variety of tomatoes, the Golden Queen. 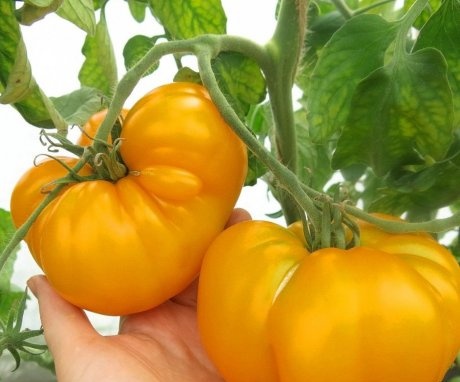 The Golden Queen tomato belongs to varieties of indeterminate type... The growing season is 95-105 days. Bushes grow tall, molding is carried out in 1-2 stems. Leaves are medium in size, dark green in color. The fruits are flat-rounded, poured to the size of a man's fist. The color of tomatoes is unusual - honey-yellow. Due to their hypoallergenicity and excellent taste, tomatoes are recommended for dietary and baby food.

Tomato agricultural technology is standard, even an inexperienced gardener can cope with growing. This is due to the unpretentiousness of the plant and its high resistance to common diseases of the nightshade.

The variety is recommended for cultivation in open ground and under a film cover. The bush is rapidly gaining growth, reaching a meter in length. This requires the installation of a support and a garter. Pinching is also carried out to the first brush.

Growing tomatoes is carried out in seedlings. The peculiarity of the variety lies in the ability to set fruit even in adverse weather conditions.

The variety was bred by Siberian breeders. As a result of their labors, a plant with hypoallergenic properties and delicious taste was obtained.

Fruits are tied in small brushes of 3-4 tomatoes. Flat-rounded tomatoes have a pronounced ribbing in the area of ​​the stalk. Deep honey-yellow skin. The pulp is of moderate density, contains a lot of juice and a small amount of seeds. The taste is sweetish with fruity notes.

Reference! In tomato many useful micro and macro elements... The fruit is recommended for allergy sufferers, children and people on a dietary diet.

The average weight of a tomato grown in a greenhouse reaches 700 g. Fruits weighing 300-400 g are considered record holders in open-ground beds. Among the giants, the Golden Queen occupies a leading position. With proper care, 6-10 kg of selected tomatoes are removed from one bush.

How to grow seedlings

Sowing the seeds of the Golden Queen directly on the beds is not done. First you need to grow seedlings. To do this, you should prepare a container of the appropriate volume, planting material and soil mixture.

You can use planting material both purchased and prepared with your own hands. The store option is preferable, since the seeds have already been processed. They only need to be soaked just before planting. It is important to prepare harvested seeds: 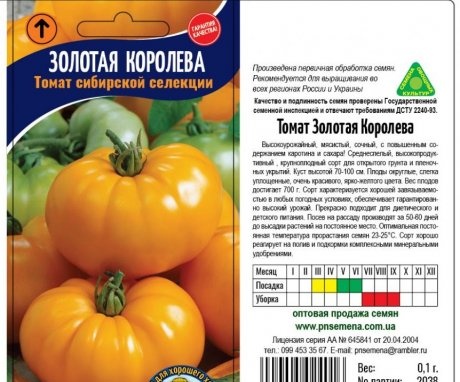 The seed develops well in loose, fertile soil. You can use a universal soil or prepare a soil mixture from the following components:

Reference! Garden or vegetable garden soil before mixing with other components should be calcined in the oven for disinfection. You can also pour boiling water over it.

For growing seedlings, wooden boxes, plastic containers, disposable cups, etc. are used. The height of the container should not be less than 15 cm. Holes are made in the bottom part so that excess moisture has a place to drain. Before filling with the substrate, a layer of expanded clay or perlite is poured onto the bottom to create drainage.

The prepared soil is moistened and allowed to settle for a couple of hours. Then the surface is slightly loosened, grooves are formed with a depth of 1 cm, seeds are laid at a distance of 3-4 cm. The same interval is observed between the grooves.

After sowing, the container is covered with transparent polyethylene or glass. You need to put the disembarkation in a warm room (average temperature 25 °). Every day, the film is removed for half an hour for airing. As the soil dries up, it is moistened with a spray bottle.

Shoots appear in about 4-7 days. From this moment, you need to remove the shelter, and put the container in a cooler place (the temperature should be 18-20 ° first, then 14-16 °). Young shoots need good lighting. Daylight hours should be 12-16 hours.

When irrigating seedlings, do not allow water to get on the greens.

The first top dressing is administered 2-3 weeks after germination. For these purposes, organics or special humic formulations are ideal.

A pick is done after 2-3 true leaves are formed on the shoots. Each sprout, together with an earthen lump, is transferred into disposable cups. After 2-3 weeks, a second pick is performed, but already in a larger container.

How to grow tomatoes 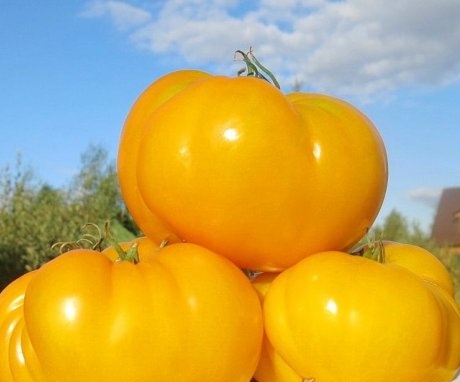 The beds are divided according to the scheme: 70x70 cm. The bushes of an adult plant are spreading, so you should not thicken the planting. This will make it harder to leave. For quick adaptation of seedlings and intensive growth, you need to prepare the soil. In addition to disinfection, it will need to be enriched with fertilizer, sand and peat if there is an increased density.

Water is first poured into the prepared holes, after which the seedling is installed. With gentle movements, they bury it, slightly pressing the soil. After irrigation, the beds are slightly loosened and covered with mulch.

Further care is in accordance with the standard rules of agricultural technology. There are some nuances regarding bush shaping and pinching. Information is presented in the table.

Features of cultivation and possible difficulties

After planting, the seedling is rapidly gaining growth. If the plant develops poorly, you need to introduce nitrogen fertilizers. It is also important to adjust the watering.

During the flowering period of potatoes, garden crops are affected by the Colorado potato beetle. He often takes a liking to tomato bushes, which can lead to the destruction of the planting. To prevent the problem, it is recommended to regularly inspect the beds in order to identify beetles or larvae. If a large population is found, insecticide treatment should be performed.

The greatest difficulties arise with stepchildren. Almost weekly, they need to be removed so that the bush is properly formed. You will also need to pay attention to the garter. Otherwise, under the influence of winds or under the weight of pouring fruits, the branches will break.

The Golden Queen tomato is characterized by strong immunity. Resistance manifests itself to common nightshade diseases. As a prophylaxis against tobacco mosaic, late blight, fusarium wilt, it is recommended to carry out the following measures:

Plants need to be systematically inspected for pests. The following parasites are dangerous to disembarkation:

When insects or products of their vital activity are detected, it becomes necessary to spray the beds with the use of insecticides. You can get rid of the Colorado potato beetle by manually collecting the larvae and adults. If this does not help, they resort to processing tomatoes with special means.

The nuances of growing in open ground and in a greenhouse

Tomato of the Russian selection Zolotaya Koroleva is intended for growing in a greenhouse. In warm regions, it is successfully cultivated in the open field. If you choose the under cover option, the following guidelines should be considered.

When cultivating tomatoes in the open field, it is advisable to install a drip irrigation system. This method is suitable not only for moistening the soil, but also for introducing nutrient compositions and dressings. This irrigation option simplifies the maintenance of the beds. In order to prevent parasites between the rows, plants that repel pests should be planted. These are: marigolds, parsley, thyme, sage, etc.

Harvesting and application of the crop

When the seedlings of the Golden Queen are planted in May, the fruits reach technical maturity in the second half of July. Tomatoes in the greenhouse ripen a couple of weeks earlier than in the open field. The harvesting period does not stretch due to the amicable formation of ovaries and ripening. Vegetables are stored long enough when placed in a cool place.

One of the advantages of the variety is the universal use of the fruit. They are suitable for the preparation of many culinary dishes. Due to their large size, tomatoes are rarely used for whirling whole.However, tomatoes are ideal for fresh salads and winter preparations, where the fruit is crushed into wedges. A thick and tasty juice is obtained from the pulp; it is also harvested for consumption in the cold season. 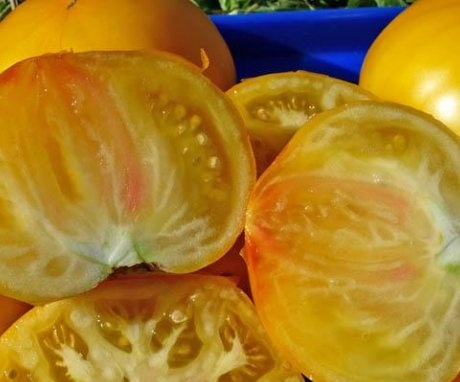 Advantages and disadvantages of the variety

The Golden Queen is well known to summer residents and owners of greenhouse complexes. The variety is popular for the following benefits:

In the process of growing a variety, some disadvantages should be taken into account:

When planting seedlings in a greenhouse, I immediately install supports. The growth of the shoots is intense, so I spend the first level of the garter already 3 weeks after planting. The plant responds well to fertilization. I use both mineral compositions and organic matter. Late blight destroyed the beds with Volgograd tomatoes and Rufus. The landing with the Golden Queen remained intact.

Tomatoes are fully consistent with their name. The golden queen is excellently cultivated in the open field. I cover seedlings with a film only at night, when there is a threat of late frosts. I really like the presentation and taste of the tomato. For the second year I have been preparing tomato puree for the winter for my little granddaughter. Nutritionists say the strain is good for toddlers. On weekends, I spoil my adult children with pizza, which I also cook with the use of the Golden Queen. It turns out to remove no more than 7 kg of fruit from the bush.

In general, the Golden Queen variety bears fruit well, but requires regular feeding and pinching. The disadvantage of the variety is the formation of a large number of stepchildren, they have to be removed almost every week. Among the advantages: stable yield, disease resistance, understandable agricultural technology.

Video review of the variety:

Based on the description, it is not difficult to grow this tomato variety. I think that you need to grow a bush in two stems, but I don't understand how - it's to pinch to the first brush, I always try to cut off all the stepsons and do it regularly.

Such tomatoes are not very suitable for a tomato, the borscht will be too pale and ugly, but for contrast, in a jar together with red tomatoes, it looks quite good and does not taste bad tomatoes.

For me, the main thing in a tomato is not its appearance, and not even its taste, I am more interested in their beneficial properties, for example, the richness of iron. But in yellow tomatoes, theoretically, it should be much less.

This variety of tomatoes is just a godsend for me. I planted seeds first in containers, when they grew up, then in a greenhouse. All the seedlings were accepted. A feature is their rapid growth, I tied them to a support. And also large fleshy fruits, because not every variety gives such a crop. The taste is very juicy and light. Children are delighted with them.

And I fell in love with yellow-fruited tomatoes for their dietetic nature. They can be eaten even by people with gout and gastrointestinal diseases. Favorite varieties - this one, the Golden Queen and the Stesha hybrid.