Review of the Cardinal tomato variety and reviews about it

When choosing tomato seeds for growing on a personal plot, it is recommended to pay attention to the Cardinal tomato variety, reviews of which are almost always positive. Excellent taste is combined with the universal use of the fruit. The intricacies of agricultural technology are described below. 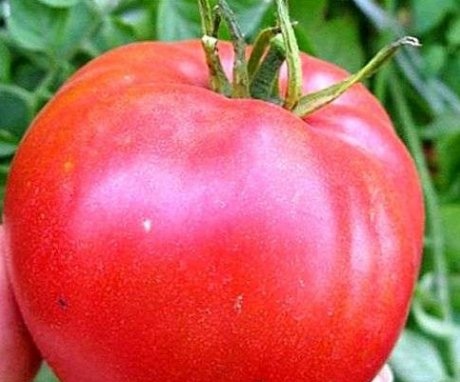 Tomato Cardinal belongs to the semi-determinant type with a growing season of 110-120 days. The plant develops quickly. The culture is unpretentious to the conditions, but there are still nuances of cultivation.

An adult bush reaches a height of 1.5-1.7 m. An intensive set of growth requires timely tying and pinching. The maximum yield can be obtained when a plant is formed with 1 or 2 stems. Tomato foliage is characterized by a light green color, medium size and poorly expressed corrugation. The inflorescence has no special signs. The first flowers appear above 8-9 leaves. Further, the bud of inflorescences is observed after 1-2 leaves.

You can grow the Cardinal under cover or in open beds, which becomes possible thanks to the self-pollination of the plant.

The ripening time of the fruits is mid-early. Taste and commercial characteristics of fruits at height:

About 5-7 tomatoes are formed on the brush. A feature of the variety is the ability to bear fruit several times during one season. The largest fruits are harvested after the first stage of fruiting. The weight of one specimen exceeds 800-850 g. The following tomatoes do not differ in large-fruited, but the weight and appearance correspond to the commercial requirements: a beautiful rounded shape with a slight ovality, the average weight is 400-450 g.

One bush gives a generous harvest per season - up to 4.5 kg. About 16 kg are removed from a square meter.

Subject to the rules of agricultural technology and favorable weather conditions, you can get the first fruits in the first decade of June. There is no need to worry about transporting the crop, tomatoes tolerate it well, without losing marketability and taste.

How to grow seedlings

Preparation for growing seedlings can be done in late April - early March. Dates are chosen depending on the characteristics of the local climate.

Sowing is done in shallow containers or containers (no more than 10-15 cm). The use of peat tablets is allowed. The container is first filled with drainage, the role of which is coped with: expanded clay, perlite or foam fragments. Next, the container is filled with soil mixture. It can be ready-made soil or fertile soil mixed with humus, peat and sand.

Reference! When using soil from the site, it must be calcined in the oven for disinfection. It is also advisable to disinfect the finished soil with a weak solution of potassium permanganate.

The seed also needs preparation. It is soaked in a solution of potassium permanganate for the purpose of disinfection. Before processing, the grains are sorted and checked for germination. These procedures can be omitted when buying seeds from a bona fide manufacturer, who carries out all the preparatory measures himself.

Sowing is carried out after irrigation of the soil and daily sludge. Trenches 1.5 cm deep are made in the soil with a pencil.The distance between the grooves is no more than 3-4 cm.Further, the seeds are laid out in a depression at a distance of 3-5 cm from each other. Sprinkle a trench with a pencil and lightly spray the sowing with water from a spray bottle. To create a greenhouse effect that accelerates the germination of seeds, the surface of the container is covered with a transparent film. All that is needed for good germination is a stable temperature regime (24-27 degrees), lighting (at least 10-11 hours). 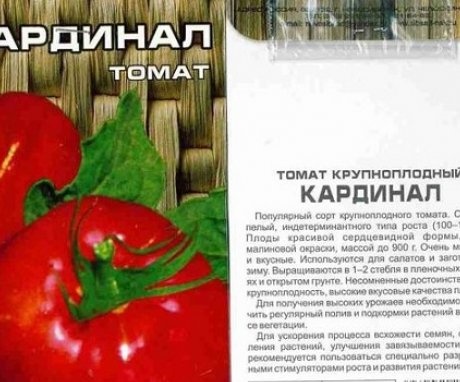 The first shoots appear 4-7 days after planting. The Cardinal variety is characterized by friendly shoots. All seeds germinate almost simultaneously. After emergence, the containers are transferred to a well-lit, but cooler room. Favorable temperatures are considered to be between 18 and 20 degrees. The shelter is removed from the containers.

To organize a full daylight hours, it is recommended to use a backlight. The ideal solution is to install a phyto lamp.

Water the planting periodically with a spray bottle. This should be done as the soil is drained. Abundant irrigation provokes decay of the shoots.

As soon as 2-3 true leaves are formed on the seedlings, you can plan a pick. Each plant is transplanted together with an earthen clod into a separate cup or pot. The composition of the soil is used the same as when sowing seeds.

Reference! When transplanting shoots into separate peat pots, subsequent planting in the garden is carried out with minimal stress to the plant. The root system remains intact due to the transfer of seedlings to the ground along with the container.

After picking, the biostimulating composition Kornevin is introduced into the soil. The rules for its use are described in detail in the instructions on the product label. A couple of weeks before transplanting tomatoes into the beds, the seedlings are hardened. Every day, the containers are taken out into the street or in the greenhouse for a couple of hours. An important condition is the absence of drafts and direct sunlight.

How to grow tomatoes

The transfer of seedlings to open ground is carried out after the threat of late spring frosts has passed. 2-3 weeks before planting, you need to enrich the soil with humus and peat. Further, it is generously moisturized and allowed to settle.

The beds are divided according to the scheme: 2-3 plants are planted per 1 m2. With a dense arrangement of bushes, thickening is created, which leads to damage by fungi and pests. Immediately after planting, the soil is loosened, irrigated and covered with a layer of mulch (at least 4-5 cm).

Care rules are the standard used for large-fruited varieties.

Table 1. Care of the Cardinal variety.

Features of cultivation and possible difficulties

When growing a Cardinal, various difficulties may arise, which to a greater extent arise due to errors in agricultural technology or against the background of unfavorable climatic conditions. Common risk factors are: 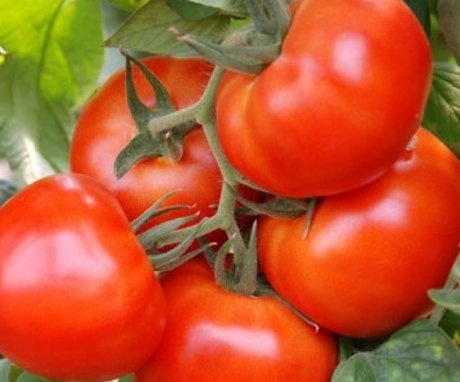 Tomato Cardinal is characterized by strong immunity, which reduces the risk of developing common diseases. But this fact does not exclude the implementation of planned preventive measures:

Reference! It is forbidden to use chemicals for processing plants 2 weeks before harvesting.

The nuances of growing in open ground and in a greenhouse

One of the advantages of the Cardinal variety is the ability to grow tomatoes under cover and in the beds. Bushes planted in open ground develop less intensively, reaching a height of 1.2-1.4 m. In a greenhouse, the plant stretches up to 2 meters, giving generous yields.

It is not recommended to plant seedlings of the Cardinal variety in open ground in regions with a cool climate. This is a large part of central Russia.

When growing the Cardinal variety in a greenhouse, it is worth considering the following features:

Harvesting and application of the crop

The fruits of the Cardinal tomato begin to be harvested in June. The fruiting process extends over the entire growing season of the plant. The first stage is considered the most prolific.

Tomatoes are widely used in cooking:

The fruits are stored for a long time. Excellent taste is used by chefs for preparing first and second courses, drinks and sauces. The fullness of tomato aroma and flavor is revealed in fresh tomatoes, which are added as a main ingredient to various salads. 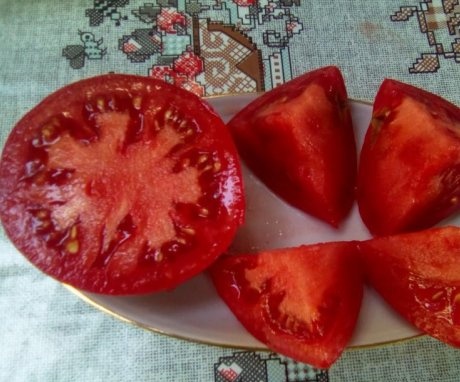 Advantages and disadvantages of the variety

The Cardinal tomato variety is very popular with farmers and summer residents, which is explained by the following advantages:

Disadvantages, although not significant, but the Cardinal has:

I have been growing the Cardinal variety for more than one year. I plant part of the seedlings in the greenhouse, the rest in the open ground. The yield is higher in those plants that develop under cover. But this method requires a lot of attention: creating a favorable microclimate, frequent garters, pinching. The yield per m2 is 12-17 kg. Less demanding outdoor tomatoes. Bushes do not develop as rapidly, which reduces the regularity of the garters. The risk of fungal infection is reduced to almost zero.

I tried Cardinal tomatoes for the first time. Previously, I did not dare to grow them because of their large size. It is unrealistic to close such tomatoes in jars. But after the experience I got, I realized that I was wrong. The fruits are very tasty, suitable for rolling salads and tomato juice. It is simply impossible to get enough of them fresh. The pulp is tender, moderately dense, without a green core.

I grow vegetables for sale. Tomato Cardinal is in good demand among buyers. He sells himself: dense, but not thick-baked tomatoes emit a pleasant aroma, the taste harmoniously combines acidity and sugar content. Fruits perfectly tolerate transportation, retain their presentation for a long time.

Video review of the variety:

I have not planted such a tall tomato yet, but I really liked the description of the variety. This year, I will try to find seeds, I will grow in the open field in two stalks, so that there are more tomatoes. With such a large fruit size, the main thing is not to overdo it with watering, otherwise the tomatoes will burst.