When breeding rabbits, it is important to correctly determine the moment when it is necessary to separate the rabbits from the rabbit. If you properly care for them at this time, you can count on getting healthy offspring. 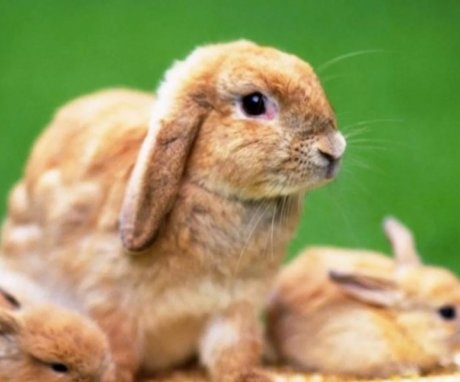 During the first two or three weeks, the rabbits are able to feed only on mother's milk and practically cannot exist without it. At this time, you need to strive to keep all the rabbits alive. In order for them to receive milk, their mother needs to be fed plentiful and high-quality food, including mineral and vitamin supplements. In this case, it is necessary to provide it with a sufficient amount of clean water.

After three weeks have passed, the babies begin to show more curiosity about the world around them, they begin to make attempts to eat the food that the mother eats. At this time, the transition of rabbits to regular food begins.

It is believed that rabbits need to be planted only after 4 weeks of growth. When 30 days have passed, they have already grown ordinary teeth instead of milk ones. By this time, the weight becomes 10 times more.

In order to protect young animals from dangerous diseases, it is important to give them the necessary vaccinations. If this is done within the first 30 days while they remain with their mother, then they will not experience complications.

What does it depend on

The timing for dropping the rabbits is associated with the following:

The time when the young are taken from the mother is determined by the technique of raising these animals.

When rabbits are planted

When grown for meat

For this, the young are taken from the uterus 45 days after birth. They are slaughtered after 4 months of growth.

This option is used for breeds of meat direction, for example, for a Californian ram or a French rabbit. When slaughtered, the amount of protein and fat is the same as that of a four-month-old calf with conventional rearing.

If it is supposed to use the uterus 9 times during, then it will almost continuously be busy feeding the babies. In order for her to gain at least a little strength. She is given the opportunity to rest for 2-3 days. Therefore, rabbits are taken relatively early - 28-30 days after birth.

With this approach to rearing, the annual offspring from one mother will be maximum and will be 60 rabbits.

If it is planned to receive 35-40 babies annually, then for this the female will need to give birth 7 times during the specified period. Rabbits with their mother in such a situation can be kept longer - 35-36 days. After that, the mother is given the opportunity to rest for 15-20 days.

When growing broilers, jigging is done for 70-75 days. By this time, the young have time to gain enough weight to be slaughtered. Sometimes fattening is carried out for another 15-20 days after that.

Mating with the male occurs after 50 days of rest of the rabbit.

When selecting young animals from a rabbit, several different methods are used.

After the rabbits have stayed with their mother for a certain time, the offspring are taken away all at the same time.

If the entire litter develops in about the same way, this indicates that the rabbit's mammary glands are developed to the same extent. In this case, simultaneous jigging is used.

If this is done one and a half months after birth, then the stress in rabbits with this method of jigging will be minimal.

This procedure can be done in various ways:

· To transplant the young from the mother;

· Take the rabbit away from them.

In the latter case, they will experience less stress by remaining in a familiar environment.

In this case, taking the young, they are sometimes returned back for a while in order to feed them.

Partial (as it develops)

In this case, the exact time of jigging depends on the degree of viability of the litter. The strongest are taken from the rabbit first. Then comes the turn of the less viable.

The weakest rabbits are deposited last. Eating milk longer, they become stronger, aligning in development with those who were taken from the rabbit earlier. Usually the time difference is 2-3 days. At the same time, the risk of mastitis for the rabbit decreases due to the fact that she stops giving milk not immediately, but gradually.

This option is used for rabbits that have an abundant milk flow. The little rabbits that were taken away at the beginning are left to the tribe, the rest, when the time comes, are slaughtered for meat. 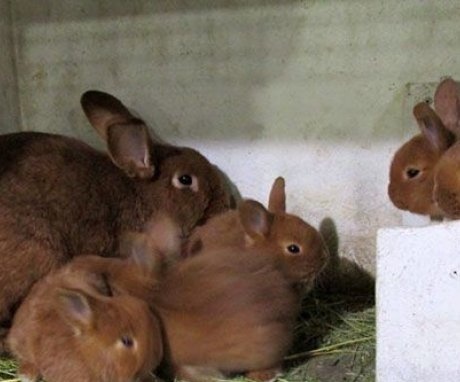 When collecting rabbits, it is necessary to weigh and determine the sex of each of them. In accordance with the results obtained, they are divided into groups.

Young stock cages must be clean and disinfected. Females should not be housed with males. This increases the risk of fights between cubs.

Usually, rabbits are placed in cages of 3-5 animals each. If necessary, it is allowed to increase the number to 7. If large aviary cages are used, then it is allowed to simultaneously contain up to 15 individuals at the same time.

During the third month:

· The rest of the individuals are planted 2 in normal cages and 6-8 in open-air cages.

Then all rabbits except for breeding rabbits are fattened for meat and slaughtered.

What and how to feed the separated rabbits

After the young are planted, it is necessary to select the right food for the animals, which will help them grow fully. At first, their health is especially vulnerable.

Food is selected in such a way as to meet the needs of the rabbits in proteins, as well as mineral supplements and essential vitamins.

When determining the diet, it must be borne in mind that the first attempts to eat their mother's food are made by the young at 17-20 days of life. Therefore, at the beginning of their independent existence, they already have the experience of eating hard fodder.

While staying with their mother, they eat the food that they feed her. Typically a mixture of mash, grain and hay is used. After getting used to this food, they do not need a lot of fatty, nutritious mother's milk, but they still depend on it by 5-10%. During this time, their gastric enzyme functions poorly.

For this reason, the acidity of the gastric juice decreases in the first week.If you suddenly switch to the use of roughage, this can lead to inflammation in the stomach, diarrhea or death of this animal.

Therefore, at first, they feed with what the mother ate. The use of greens is introduced gradually, in parts. Since the cubs can overeat, feed should be given in small portions three times a day. 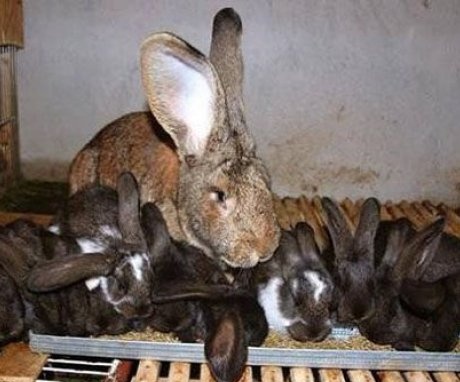 Little rabbits were left without a rabbit

There are several options:

However, such feeding does not guarantee one hundred percent survival.

The rabbit throws out the newborn rabbits

In this case, you can sometimes resort to tricks:

If such tricks do not help, you need to switch to artificial feeding.

How to tell the gender of rabbits

At this age, the external genitals look similar, and even experts cannot always reliably determine their gender. When examined, a round hole is seen in males, while in females it is in the form of a slit. In small rabbits, it makes sense to use a magnifying glass for a more accurate determination.

It is not recommended to put together rabbits from different litters. Sometimes fights arise between animals - then they are seated in different cages.

If a joint seating is necessary, you need to plant the rabbits in it at the same time. This will eliminate conflicts between those who have been in the cage for a long time and those who have just been planted.