Slaughter of chickens on an industrial scale is carried out when the birds reach the age of 1-2 months. Slaughter time depends on the breed of poultry, weight, economic purpose. At home, the poultry is slaughtered after the prescribed time. Slaughter methods and techniques differ. We will tell you more about them and how to properly slaughter a chicken at home step by step. 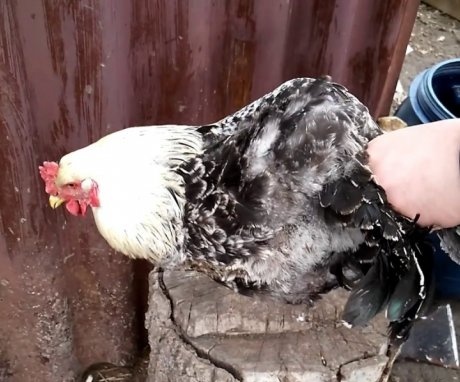 When is it time to slaughter chickens

In small farms, poultry is usually slaughtered in the fall, at the end of September - October. Slaughter time is associated with:

An important factor in determining the time of slaughter is the date of birth of the chickens. If the farmer purchased day-old, week-old chickens in March, then September-October is the most suitable time for slaughter.

Before slaughter, the farmer inspects the poultry population. First of all, malnourished and gaining weight, sluggish, with a discolored scallop or legs of chickens are slaughtered. There is always a risk that the bird will suddenly die (it is difficult for a non-specialist to determine whether a chicken has a disease). Slaughter prevents loss. If all birds look healthy, then most often they start slaughtering with males. They are heavier than chickens (there is more meat), more mobile, there is a risk of rapid loss of their gained mass.

A container of water is placed in the cage or box where the bird is. Fluid is needed for the earliest possible release of the intestines. Dehydration of the chicken can lead to drastic weight loss, which is undesirable.

To carry out the slaughter, you will need:

The farmer will also need a gas burner to get rid of the finest hairs remaining on the chicken skin after scalding and removing feathers.If there is no gas burner, the carcass is held for some time over a regular gas burner, periodically turning it over and exposing the necessary parts of the body to the flame.

At home, birds are slaughtered in several ways. The choice of a specific one depends on how long the meat is planned to be stored, as well as the purpose of this meat. So, if the carcass is not intended for sale, then reddening of the meat or not too beautiful cutting will not cause any complaints from anyone. To preserve the presentation, it is necessary to slaughter very carefully.

The easiest way to slaughter a chicken is with a wide cleaver or ax:

With one hand they press the chicken to the board so that it does not flutter, in the other hand they hold an ax. A bird's neck is cut with it. The main disadvantage of this method of slaughter is considered to be that as a result, an open wound is formed, the meat turns red and is stored for less than the prescribed period. It is best consumed immediately after slaughter. The instant death of the bird can be considered an undoubted plus.

The most reliable way to preserve the quality of meat is external slaughter with a knife or sharp scissors. The chicken is clamped between the knees (you can put its body in a bag by tying its ends at the neck), take it by the head with one hand, and use a knife to make an incision under the earlobe, retreating by about 2 cm.At the same time, the jugular vein, facial and sleepy veins are cut arteries. Choose a sharp knife, the length of the cut usually does not exceed 1.5 cm. 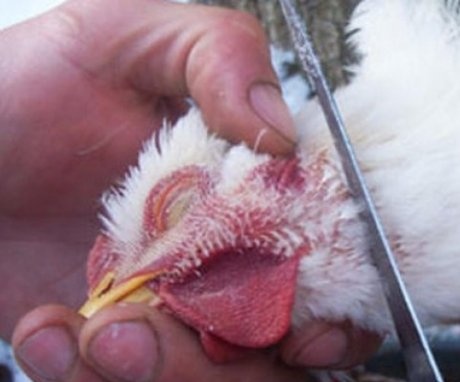 Split (through the beak)

The bird can be slaughtered through the beak or cleft. The farmer will need sharp scissors. Slaughter is carried out with preliminary stunning (if the chicken is large) or without it. Bird:

Important! The second injection is carried out to relieve tension in the muscles of the bird, they relax, as a result, it is possible to bleed the carcass faster and pluck it better. Blood must not get inside the carcass. The bird is suspended by its legs and allowed to drain.

Sometimes a bird is slaughtered after stunning it. But, without experience, it is better not to try to do this. Too strong a blow can kill the chicken and clot blood inside its body, making the meat unfit for sale and even not completely safe to eat.

The bird is placed in a bag, leaving its head on the surface. They take a blunt heavy object and hit the chicken on the head with it. As soon as she loses consciousness, I cut her neck with a knife or detach her from the body with an ax. You can also use split scissors to hammer the bird.

Immediately after slaughter, the bird is suspended by its paws using a hook, or simply by tying its paws to a rope stretched between two posts. It is necessary that all the blood has left the carcass. To prevent the liquid from draining to the ground, and this place does not attract domestic dogs and cats, a bucket or any other container is placed under the carcass.

There are at least 4 options for removing feathers from a bird at home:

After the feathers are removed, the carcass is rid of droppings and grain residues in the crop, gutted.

Litter can be removed in two ways:

Removal of droppings must be carried out carefully, the contents of the intestines that have got on the meat will make it unusable. 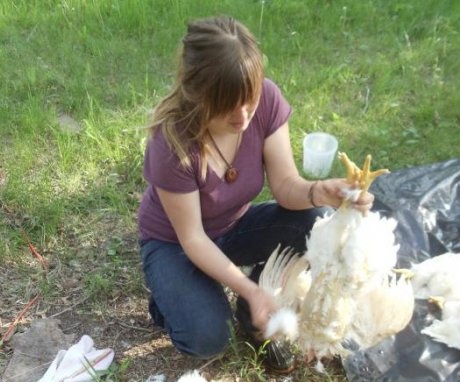 If the chicken is for sale, then a hole is made under the tail with a knife. Through it, the intestines and internal organs are carefully removed. Legs, wings and neck are not touched. The carcass is washed with warm water, after which it is poured over with fire from a burner. This will help get rid of the finest hairs and fluff residues. If there is no burner at home, then you can burn the birds over a regular gas burner. The main thing is that after singling, no burns and soot remain on the skin. This can be avoided by timely turning the bird over and holding it at a distance of at least 2-3 centimeters from the flame. The same procedure can be carried out over a fire. But before that, it is better to rub the carcass with flour (it will protect against soot and soot).

If the chicken is slaughtered for home use, then after removing the droppings, the carcass is singed, and then:

Gutted carcasses are stored in the refrigerator or in the freezer, in which case the shelf life is practically unlimited. If the farm has a cellar, then the carcasses can be placed there. The meat is stored in the cellar for up to 5 days. To slow down the process of decay and spoilage of meat, each carcass is wrapped in a cloth soaked in vinegar.

In winter, in severe frosts, the skinned carcasses are hung on clotheslines right outside. In this position, they are stored for a day, after which they are doused with cold water and again taken out into the street. The procedure is repeated 2-3 times, after which the carcasses are wrapped in a cloth and placed for permanent storage in the freezer.

Before cutting, the chicken is doused with cold water, kept in cool water for 5-10 minutes. This will help preserve the natural color of the meat. Otherwise, it may turn pink or redden, losing its presentable presentation.

From the internal organs, the heart, ventricle and liver are left. They are boiled in broth or fried.

Important! When cutting a carcass, the main thing is to carefully remove the pancreas. If damaged, the meat will acquire an unpleasant bitter taste and will have to be thrown away. If the liver has an unpleasant appearance, is covered with pimples or spots, it is also better to throw it away.

If the chicken is for sale, then all internal organs, including the liver, are preserved, even if the seller does not plan to sell the viscera with the carcass. They are necessary for the passage of veterinary and sanitary control. It is the internal organs that the checking specialist determines the quality of the carcass. If the farmer is unable to provide entrails for testing, the carcass may not be available for sale.

The internal organs are removed carefully, using one hand while holding the carcass with the other. If the hen is a laying hen, then it is likely that an egg will be found inside, it is removed, trying not to crush, so as not to mess around with washing the meat.

There are several methods to slaughter a chicken at home. The choice of a specific one depends on the preferences and further use of the meat. For slaughter and butchering, you will need sharp knives and scissors, clean dishes, for folding meat, entrails. All this must be prepared in advance. Before slaughtering, the birds stop feeding, but if slaughtering is forced to not avoid this, more attention will have to be paid to the removal of droppings and grain residues.

Watch the video instruction for slaughtering a broiler:

It is not easy to slaughter a chicken, especially for a woman, the chicken is of course a small bird, but it still needs strength, since the bird naturally resists. Our grandmother cut a chicken a couple of times, in other cases other people were invited.