Dahlias "Merry Guys", the cultivation of which is not difficult, are one of the most common and favorite varieties. They got their name due to bright buds, these flowers are able to create the most cheerful and cheerful mood. This variety has gained widespread popularity due to its gorgeous flowers in a wide variety of colors, as well as its drought tolerance. 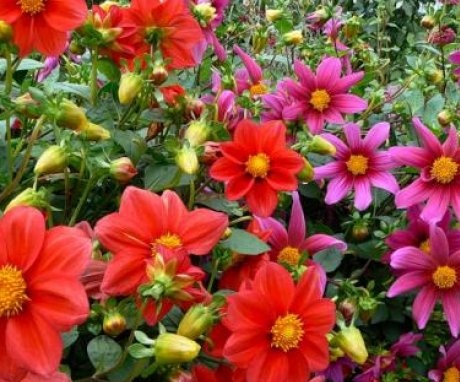 Dahlias are originally perennial plants, but "Merry Guys" - annual dwarf cultivar, the flowers are cut in the first year after planting. In the middle lane, the dahlia cannot survive the winter, so it does not form tubers. Once this variety was the most common decoration of flower beds and flower beds, now it is somewhat supplanted by begonias and marigolds.

The height of the bushes ranges from 25 to 70 cm, the plant has strong stems with bright green leaves.

The diameter of the inflorescences can reach 9 cm, it is a very bright and noticeable flower that can have white, pink, lilac, red and other shades. Dwarf dahlias can be simple and terry.

These flowers are grown to decorate flower beds., they look great against the background of other, less vibrant colors. The dahlia flower bed turns into one of the most noticeable garden decorations, and it will not disappoint its owners.

"Funny boys" - heat-loving and light-loving varietyable to tolerate even prolonged drought well. At the same time, they are undemanding to the composition of the soil, but they definitely need light: if you plant them, for example, in the shade of a fence, the stems will be too thin and fragile and you can not count on lush flowering.

It is recommended to pre-spill the soil mixture with a solution of potassium permanganate, this will protect the plants from various diseases.

The main method of reproduction is seeds, while you need to follow the basic rules: 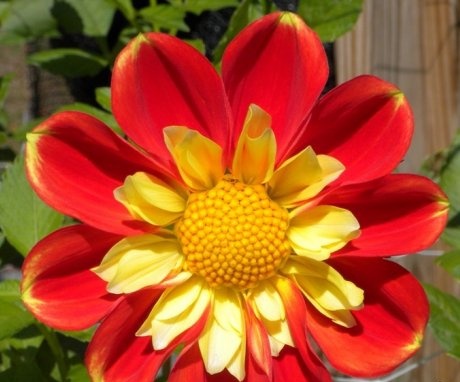 The soil in which the dahlia will be planted should be pre-fertilize with manure or humus, this will allow for faster growth and lush flowering. Bushes begin to bloom actively from mid-July, and until the very first frost they will delight you with magnificent buds. The flowers bloom one by one, so the bloom will not stop.

To extend the life of the plant, the roots are covered with a film or special non-woven material at night.

When flowering is complete, leave the strongest bushes on the vine to collect the seeds. They are carefully separated from the petals when the inflorescences are completely dry, after which they need to be additionally dried in the sun. Seeds placed in a paper bag can be stored for several years if kept at room temperature.

If desired, you can save dahlia tubers for the winter, which can later also be used for planting.

They are removed from the soil before the first frost, small roots are cut off, for storage, the tubers need to be dried and covered with sand or peat. Practice shows that from such tubers you can get powerful plants and achieve lush flowering the next year.

Annual dahlias can also grow by self-seeding. Last year, I grew them from seeds, they all emerged on 4-5 days, bloomed in June, flowering continued until freezing. She scattered the ripe seeds, not hoping that they would sprout themselves. 5 bushes have grown this year, bloomed in July.