Peony roses at this time belong to bush roses. After all, ori have not yet been included in the world classification as a separate species. Peony roses got their name for their extraordinary similarity in shape and color with the real peony... They are smaller in size, but still larger than most species. roses. 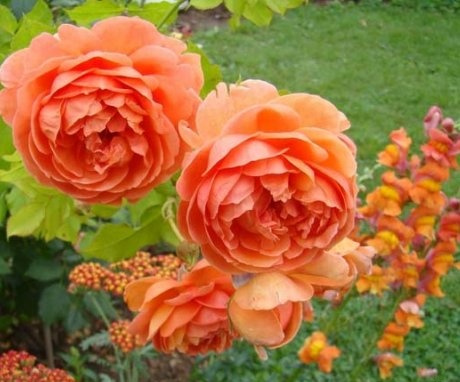 The beginning of the history of peony roses was laid at the end of the last century by the English gardener David Austin. Therefore, they are sometimes called Ostinks. Flowers consist of a huge number of petals compressed inside the wrapping ones. In most varieties, they do not fully unfold, retaining their appearance without any significant changes until the end of flowering. Features of peony roses, allowing them to be distinguished into a separate group:

Peony roses differ from other roses not only in the shape of the flower, but also in their good endurance. Requiring minimal maintenance, the bush quickly turns into a garden decoration. The colors are varied, from white with a pink tint to dark purple. There is no pure white.

Today, there are about 200 varieties of peony (English, Ostinka) known. Despite the unpretentiousness to growing conditions, not all of them can withstand frosts. Therefore, the number of varieties growing in our climatic conditions is limited. Nevertheless, there is enough choice to decorate the garden with English roses of various colors and heights of the bush. 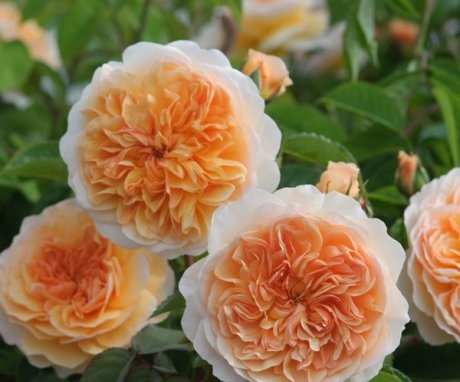 The main varieties of peony roses:

Reproduction of a peony rose 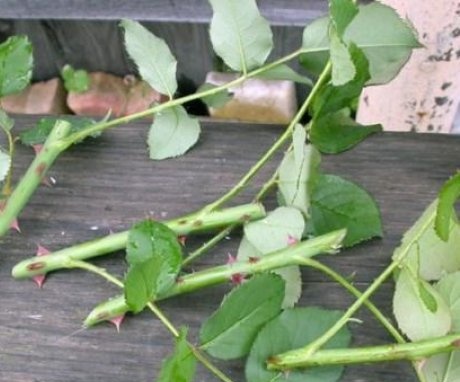 For the cultivation of peony roses, grafting is used on the Rosa laxa stock. They differ in that they do not give root growth. In summer, budding is used in a T-shaped incision on the shoot. A kidney with a shield is placed in it, cut off immediately before inoculation. They are carefully fixed with a medical plaster, the junction is treated with garden varnish. It is advisable to make a sun shield. When a young shoot begins to grow from the bud, the protection is removed. Over time, the fixing patch is also removed. If this is not done, moisture and nutrients will soon cease to flow to the shoot, and it will dry out.

It can be done in winter. To do this, keep the cuttings in a damp newspaper placed in a plastic bag until callus forms at the end of the shoots and the buds germinate. Planted in a pot, covered with a glass jar. In the summer they are transplanted in partial shade.

Nearby, you can plant cuttings acquired recently. They are cut from this year's shoots, which have already become a little woody and will not wither. Take a 3-leaf stalk. The two lower ones are cut off, the upper one is left in whole or in part. Immersed in loose soil up to the upper bud. Cover with a jar, create a greenhouse. Now the method of growing cuttings of roses in a potato tuber has become popular, from which the eyes are previously cut out.

All about planting a seedling 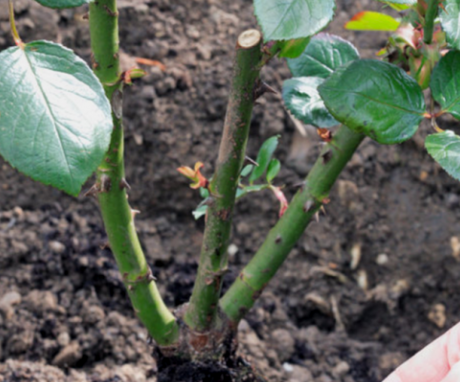 The soil for growing roses must be nutritious. Before planting, a large amount of rotted manure is introduced. Horse is best suited, but due to its inaccessibility, other types are used or compost.

The site must be illuminated by sunlight for at least 3 hours a day. Under large trees or on the north side of the building, the peony rose will practically not bloom.

The distance between bushes for group planting should be at least 50 cm, and for lush bushes up to 1 m. You can plant them in the form of a triangle. So thickets will quickly form from them. By pruning, give the bush the desired shape. As a result, original compositions of abundantly flowering rose bushes are obtained. For planting in groups, it is recommended to choose bushes of the same growth rate or plant them, taking into account the height of an adult bush.

After planting, the rose is watered with 1-2 buckets of cold water. The trunk circle is mulched with sawdust, peat, humus or cut grass. This will protect the soil from drying out and reduce the amount of watering. The first six months are often watered, every few days.

In the future, as it develops, the number of watering is reduced. Roses planted in partial shade or well mulched require less watering. 12 to 15 liters of water are added to one bush at a time. Watered in the evening.

The next year after planting, they start feeding the roses. Fertilizers are applied:

Too many mineral fertilizers can lead to yellowing of the leaves or even death of the plant. Pruning roses helps to prepare plants for winter, and in spring and summer to form a bush of the desired shape. All shoots are shortened by a third of the length. For the winter, they are sheltered from frost so that the buds and shoots do not freeze.

To create a lush bush, only thin shoots are pruned. To form a rounded crown, cut off 2/3 of the length of the stem. Peony roses are not damaged by pests and diseases. 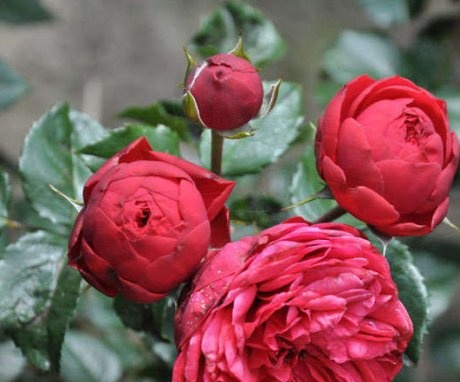 Despite the fact that peony roses appeared relatively recently, they managed to win the hearts of the gardener with their positive characteristics. They are planted singly or in groups. They create compositions from varieties of various colors or other types of roses are planted in the foreground.

Peony roses look good against the background of conifers, grapes or clematis of contrasting colors.

The use of peony roses to create bouquets is widespread. Due to their beauty, abundance of colors and aroma, they are especially popular with brides. They are used to create wedding bouquets, they are used to decorate halls for special events.

This amazingly beautiful flower is now actively used in wedding bouquets and it is no coincidence - it looks just amazing. I'm already thinking about trying to grow this miracle.

I was once brought such a rose, the smell of it, somewhere a little even a little like a peony, is somewhat similar. I wonder if this type of rose, if there is no good care, will turn into a rosehip, or not?

There are many varieties of roses, both in color, smell, and in the shape of the flower. A peony rose can be planted with cuttings, but its frost resistance will be quite low. Therefore, for the winter, the bushes will need to be covered.