Pelargonium thyroid: the best varieties and tips for growing

Pelargonium or among the people, geranium is the favorite of many gardeners. It differs in a huge number of varieties and species. One of the types is the thyroid (ivy) beauty. It differs from other geraniums in that it has a beautifully outlined leaf, with a glossy surface.

The plant is represented by a large number of shrubs with original colors. But, having chosen a separate shrub and planting it in a flowerpot or in an open area, you should know about the growing conditions and care recommendations. 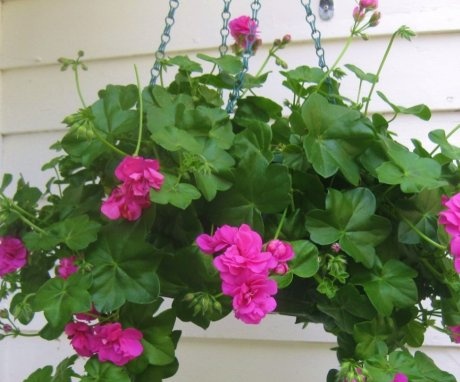 Pelargonium thyroid is an interesting flower with creeping vines, thin in structure, but strong enough. Shoot length with good care can reach 70-100 cm.
At first glance, they are easy to break, but if you get down to business, then carrying out this process is quite problematic. In order not to injure the plant, it is recommended to cut it with a sharp pruner or garden shears.

Pelargonium has five-lobed fleshy leaf plates. In color, the foliage has a rich green, light green or variegated tone. The homeland of the shrub is South Africa. The plant loves to grow in high humidity and abundance of sunlight. If these conditions are implemented, then the bush will delight with its flowers from early March to late autumn days.

Peduncles are formed in the axils between the leaf cuttings and the main trunk.

The arrow tends to stretch out 7-10 cm, at the end of which a significant number of inflorescences are formed. When the buds open, a huge, bright ball forms.

Ivy Pelargonium is a flower with various colors, both delicate shades and bright, flashy:

Each of the flowers is up to 1.5-2.5 cm in diameter, and some large-flowered geraniums boast a single flower up to 4 cm in size. In this case, geraniums differ not only in the shade of the flowers, but also in the structure of the inflorescence. It can be terry or simple. In most cases, gardeners grow geranium in the form of an ampelous shrub in hanging flower pots or pots. In this case, long shoots hang beautifully from the pot, attracting the eye with their bright inflorescences of flowers. 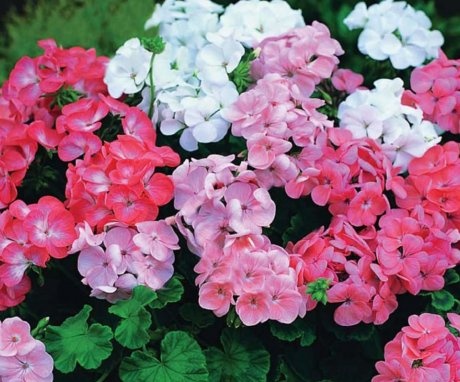 There are only 75 species of pelargonium in wildlife, which differ in color, leaf shape and bush structure. Modern breeders from different parts of the world have made a huge contribution to the development of species varieties.

There are over 500 collectible and industrial cultivators on the industrial market.These geraniums are conditionally divided into two large subgroups - independently ivy geraniums and ivy hybrids (ivy hybrids).

On the Russian market, only two varieties can be found in the form of seeds:

A much larger selection of ivy geraniums is represented by rooted cuttings or grown bushes. In large nurseries or specialty stores, you can find different varieties, such as:

Growing pelargonium is not difficult if you know all the nuances and rules and try to follow them methodically. Geranium will respond with frequent and long flowering and rapid growth of bright glossy shoots. 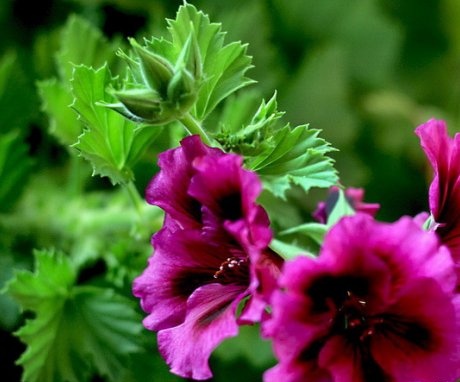 Geranium is unpretentious, so good lighting and periodic maintenance are its main requirements. For cultivation, you will need to transplant it to a permanent residence in a separate flowerpot immediately after purchasing the cuttings.

For quality growth, nutritious, loose soil is needed. It is desirable that the soil is initially fertile with a neutral pH environment. Otherwise, if the soil is acidic or alkaline, geraniums will not be able to develop normally and will sit in one place. Flowering begins in early spring, so watering is carried out as needed. In autumn, it is recommended to slightly reduce the introduction of moisture into the soil.

To do this, it is recommended to eliminate all feeding, reduce the temperature to 12-150C and put it in a place with sufficient sunlight. Moreover, if pelargonium feels a lack of light, its shoots will begin to quickly stretch and shrink. Therefore, experienced gardeners are advised to reduce the vine to a maximum of 20-30 cm. 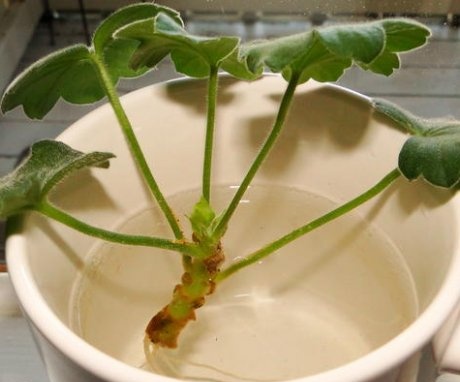 Planting is carried out in a pot, which is specially selected for a certain type of geranium. If they ate geraniums from the ampelous type, it is recommended to choose a larger flowerpot.Otherwise, if pelargonium is represented by a compact variety, then the container does not need an oversized one.

If planting is carried out directly into open ground, then the planting hole should be 20 cm deeper than the rhizomes.The distance between the bushes must be left at least 30-40 cm.

Pelargonium propagation occurs in two ways: cuttings and sowing seeds. In the latter case, sowing seeds can be started from the first decade of December to the last days of April. But this growing process is possible if there is a possibility of additional highlighting in winter.

For cultivation by cuttings, it is necessary to obtain high-quality seedlings. For this:

The first rhizomes appear within 3 weeks. After 2-3 months, the seedlings can be transplanted to a permanent place of residence. 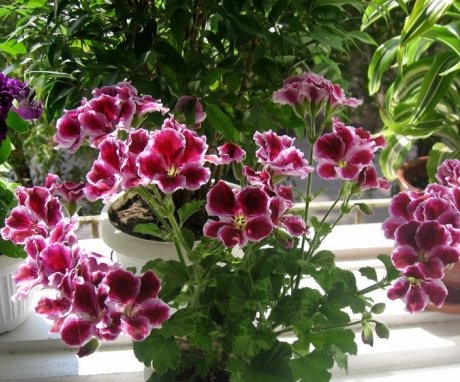 In order for geranium to develop well and quickly, it is recommended to follow certain care rules:

Thanks to the fulfillment of the rules, the shrub will grow for a long period, develop magnificently and delight not only with bright colors of inflorescences, but also with massive, strong stems.

Everything you need to know about a transplant 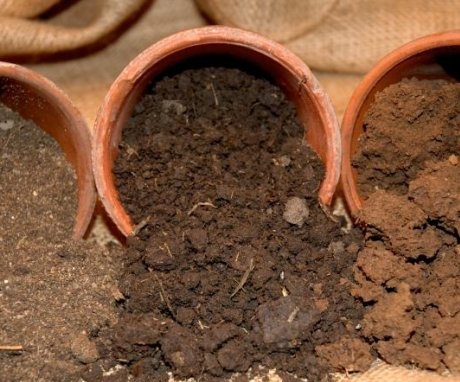 Both adults and young plants need to be replanted annually. The procedure is recommended to be carried out in the spring, before the beginning of the growing season. In the spring, mature plants should be transplanted into a larger flowerpot. This is necessary due to the fact that the root system of the thyroid pelargonium significantly branches and draws all the nutrients from the soil, significantly depleting it.

But do not overdo it with a flowerpot. If you plant a plant in a flowerpot much larger in volume, then pelargonium will begin to develop the root system in place of the ground part. Until the rhizomes completely fill the entire flowerpot, the shrub will not start growing. Transplantation of thyroid pelargonium must be carried out by transshipment. To do this, it is necessary to slightly moisten the soil in the flowerpot, so that you can easily pull out the clod of earth from the flowerpot. If possible, the earth is slightly shaken off the bush, but so as not to injure the root system.

Expanded clay or other drainage is laid out at the bottom of the flowerpot.

It is necessary so that nutritious moisture does not stagnate in the flowerpot, provoking root rot. After that, a small layer of fresh soil is poured. A plant is placed on top of it. Fresh fertile soil is poured from the sides and top.

The substrate needs to be lightly tamped. It is imperative to ensure that no hollow holes form in the soil. After transplanting, the plant should be well watered. Old pelargoniums are not transplanted, fresh soil is added to them without transplanting. This is done by adding the soil mixture after the top depleted layer has been removed.

Diseases, their signs and methods of treatment 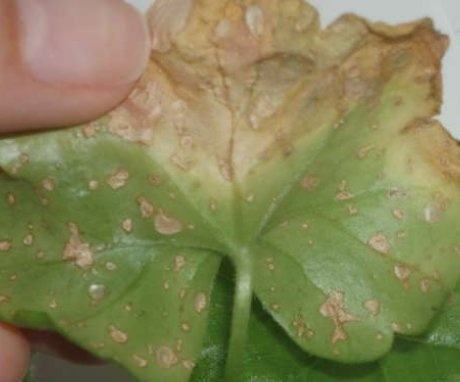 In most cases, pelargonium thyroid and its varieties are resistant to various kinds of diseases and pests. But in some situations, they can be affected by the following diseases:

If you follow the plant and detect a dangerous disease in time, then it will not be difficult to cure pelargonium. But if the bush is heavily infected, it is recommended to urgently resort to either intensified control actions using chemicals, or to take cuttings and grow a new healthy plant.

Pests, their signs and control of them 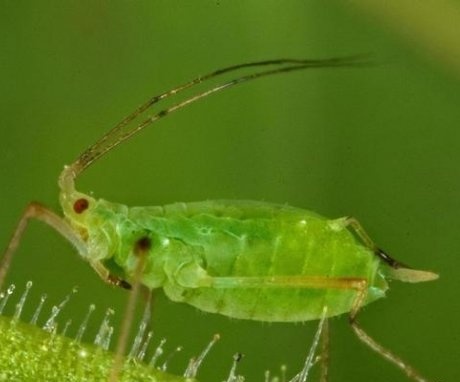 Pelargonium does not differ significantly from other plants and is affected by various pests during the growing season. There are the following parasitic individuals that love to settle on juicy fleshy geranium leaves:

Their general signs of appearance on a plant do not differ from settling on other shrubs and flowers. To fight, you need to monitor your own houseplant and, if an insignificant amount of parasites appear, manually eliminate it by carefully examining the plant. Additionally, you can apply folk remedies.

Otherwise, if the population has crossed the acceptable limits, the only way to cope with the problem is to use chemicals.

Thus, the thyroid pelargonium or ivy geranium is an original bright plant that attracts the eye not only with its lush flowering, but also with its specific foliage. In order for the shrub to develop quickly, it is necessary to follow the growing rules and monitor the care, although the plant does not require specific conditions, lack of care leads to the occurrence of diseases and parasites.

I really like to grow these flowers on the balcony in the summer, for the winter I clean them in the barn between the floors. They tolerate dry air in the apartment rather hard. And from spring to autumn they delight me with their flowering.