Duke grapes: all about cultivating the variety

The Duke hybrid grape belongs to the new varieties. Like any novelty, it is of interest to gardeners. So far, the reviews about the variety are somewhat contradictory. Experts note that it requires study and observation. But some conclusions can already be drawn. 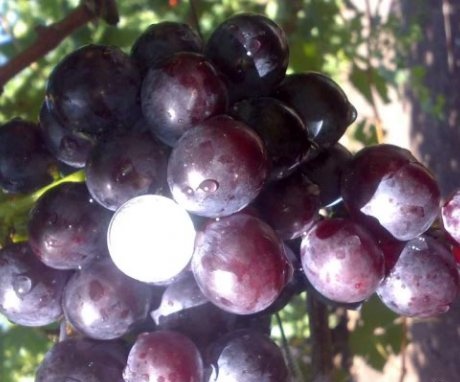 Herzog grapes were bred by amateur breeder A.V. Burdakov. This is not the first variety in his collection. The author created a hybrid Duke, crossing the Talisman varieties with Hadji Murat. The result is an early ripe hybrid with a period from flowering to fruit ripening of 3 months.

It got its name for large clusters, the weight of which ranges from 0.5 kg to 1.1 kg.

According to the description, they consist of large oval-shaped berries of dark purple color. Weight of one from 15 g. Fruits are covered with a blue waxy bloom. Reviews of some growers claim that their bush does not form bunches. Only single, very large berries grow. Perhaps this is due to insufficient care.

The berries of the Duke variety are delicious, the flesh is fleshy, and at the same time juicy. It is covered with a rather dense skin. It does not allow the fruit to crack when ripe, but is practically invisible when eaten. The Herzog grape bush is tall, grows quickly, building up powerful shoots. They ripen well. The flowers are bisexual, so the variety does not need pollinators to be placed nearby. 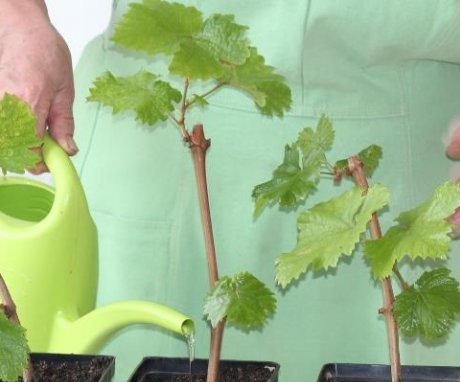 Features and rules for grafting:

At this time, a mixture is prepared for planting cuttings. Mix sand, rotted sawdust, humus, peat. Such a mixture will not thicken and rot, so the cuttings will not disappear in it. Moisten the prepared soil and pour it to a height of 7 cm into the prepared dishes. Most often these are 1.5 liter polyethylene bottles with a cut-off top and large holes in the bottom for water drainage.

A stalk with callus or small roots formed during kilchevanie is placed on the soil layer. The remaining space is filled up, compacting the substrate. The upper kidney remains open. An escape will grow from it. To prevent it from drying out, cover it with a plastic cup.Kidneys that go underground are not needed. Therefore, they are cut off.
Periodically water the soil in a bottle, make sure that it does not dry out. The roots that appear after a while can be seen through the plastic of the bottle. This is another advantage of such cookware. 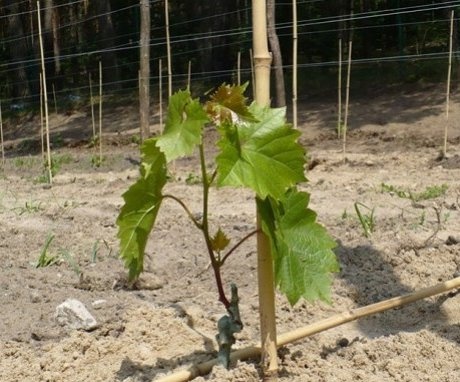 They are in no hurry to plant a rooted stalk. It is better to do this at the end of May on a cloudy day, so that the bright rays of the sun do not burn the young leaves. But first, for at least a week, the cuttings are hardened by setting them in the fresh air.

If the soil has crumbled, spread the roots along the sides of the mound. Sprinkle with prepared soil. After filling half of the pit, pour a bucket of water. Make sure that the seedling does not go to the bottom of the pit. To do this, hold it with your hand. A peg-support is installed, to which the bush will subsequently be tied. They fill up the earth, using the one that was previously set aside.

If the seedling has a developed above-ground green part, then the soil is covered up to the base of the shoot.

If cuttings are planted in which the upper bud is not developed, a mound of earth is poured above it. Do not seal. The sprout that forms from the bud should easily come out. Shade from the sun. If the soil has not fallen away from the roots or when planting a cutting with a closed root system, a layer of earth 5 cm high is poured onto the bottom of the pit, a lump of earth with a cutting is placed, a peg for tying is placed next to it, and the hole is filled up.

When planting annual seedlings, first root the heel roots to a length of up to 10 cm, remove the dew roots. Leave the two strongest shoots, shortening them above the second eye. If there is only one shoot, 3 buds are left. Dip the roots of the Duke grapes in a clay chatterbox. In the northern regions, where the Duke grape bushes are prone to freezing, it is advisable to plant them in trenches, deepening below ground level. In this case, the heel roots of the grapes will be less damaged by frost. 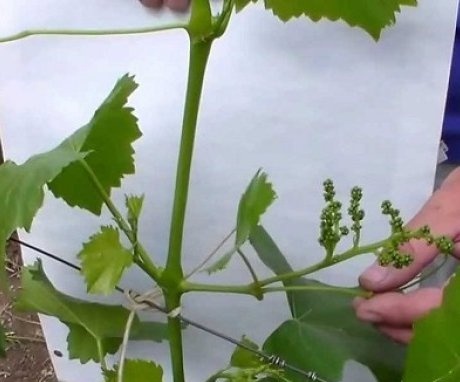 The Duke grape bush is formed from two sleeves. For this, in the first year after planting, the two strongest shoots are grown. Additional branches, stepchildren, which usually form on the bush, are removed, not allowing them to use nutrients.

If the bush was formed from one vine, choose the strongest stepson who looks in the opposite direction, the rest are removed. A second sleeve will form from it. In the first year, the vine should grow to a height of one and a half meters. At the beginning of September, they stop watering the bush, pinch the upper part of the shoot. This procedure will help ripen the vine.

Adult bushes are also covered for the winter. After the leaves fall off, pruning is carried out, the lashes are tied with twine, laid on the ground or in a specially prepared ditch. Sprinkle with earth or covering materials. The dangers that lie in wait for the bush in winter: damping of the buds during a thaw and the eating of the buds and bark by rodents. Therefore, you should not cover the bush with straw, and in regions with warm winters - with polyethylene.

In our region, I have not yet come across such a variety. According to the description, the variety is very interesting, however, it is not clear why the Duke requires multiple watering? We do not need to cover this variety for the winter, since frosts are more than 23 degrees, they are rare and, moreover, not every winter.