Growing potatoes in a barrel: a method of increasing yields

Probably, there is no person in the world who would not like potatoes. Due to its excellent taste and nutritional value, it has gained wide popularity around the world. It is grown on their plots by both novice gardeners and experienced gardeners. Of course, now in the markets and in stores you can buy potatoes of any kind, but it's much more interesting to grow it yourself. Moreover, modern cultivation methods allow you to get an excellent harvest with little effort and time.

Potatoes first appeared in Peru almost 4500 years ago. It was originally a wild potato that attracted the interest of local residents. They developed varieties that could tolerate the cold. These varieties began to be eaten. In the 16th century, the Spaniards, who came to South America with the aim of conquering new lands, as well as searching for gold and treasures, stumbled upon products they did not know. These were beans, corn, and potatoes. They did not immediately realize that they had fallen into their hands potato and called the tubers a truffle. This is how the potatoes came to Spain. From here, potatoes began their journey of gaining European and world recognition.

The potato path was not easy. In Europe, it was considered unusual and was wary of the appearance of this novelty. Some considered it an unhealthy, unhealthy vegetable. But there was another group of people who enjoyed eating potatoes and recognized them as a healing vegetable. They believed that it could cure many diseases, from diarrhea to tuberculosis. In addition, there were rumors that potatoes were a potent aphrodisiac. 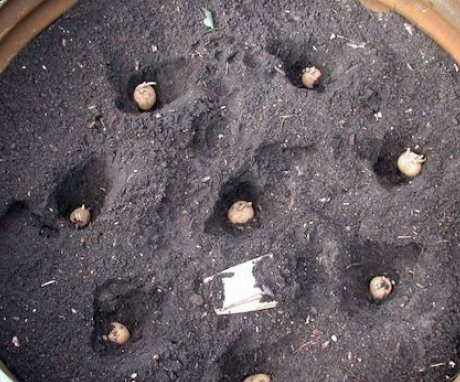 Only in the 17th century did potatoes become popular in Europe. It began to be grown as a valuable vegetable crop that could feed large masses of people. Since then, people's perception of potatoes has changed significantly. Now it forms the basis of the diet of any person.

Experts never stop coming up with various new ways to grow it, which will save time and effort. Now many gardeners abandon the traditional cultivation of potatoes in the beds and try to grow them in bags, in boxes, in barrels, in straw.

Rules for growing potatoes in a barrel

Barrel growing of potatoes is gaining in popularity. This method allows you to get abundant harvest from 1 meter of area. To do this, you need a barrel with a volume of 7 liters or more, which must be painted white so that it does not overheat in the sun and the crop is not cooked in it.

The bottom of the barrel is removed so that excess moisture can freely come out. In the walls of the barrel, it is necessary to make holes with a diameter of 1 cm every 10-20 cm in order to provide oxygen access to the root system of future bushes. A 10-20 cm layer of drainage is poured at the bottom of the barrel.A mixture of turf soil, ordinary soil and the preparation "EM-bokashi" in a ratio of 1: 1: 1.

Potatoes are planted every 20 cm. Fill the barrel with soil as the tops grow. As soon as the sprouted sprout reaches the upper boundary of the soil, it is necessary to fill up the next layer of soil.If this is not done, then the sprouts will fully germinate and form the green part of the plant, the root system will remain unformed, and only the green stem will develop further, and not the potato tubers. 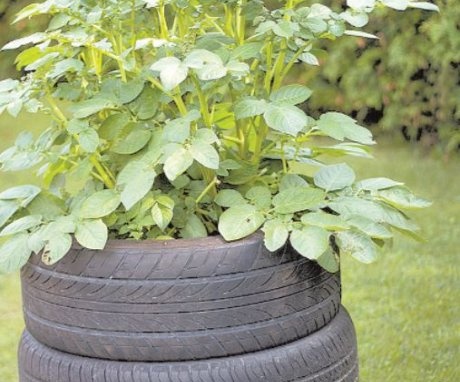 If it is not possible to constantly add soil, you can immediately plant the potatoes in a barrel with three floors. Correct planting potatoes will be the key to the formation of powerful tubular root systems with a huge number of tubers.

Potatoes planted in this way must be watered 3-4 times per season. Watering should be plentiful. It should also be remembered that by mid-July, the soil will again require feeding, since all the nutrients have already gone into the formation of potatoes. It is advisable 2-3 times a week to feed with a talker, which is made from sod land and the EM-1 preparation.

If all the conditions are met, you can get more than a bag of potatoes from 1 meter of area.

This method of growing has its adherents and opponents. Gardeners got completely different results when using this method. Still, growing potatoes in a barrel has undoubted advantages. 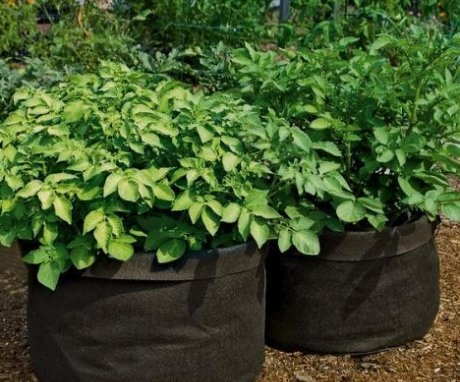 In addition, due to the fact that the soil warms up more intensively in the tanks, the soil temperature already on May 5-10 becomes optimal for planting potatoes. That is, the harvest will be received earlier.

The barrel does not take up much space. It is not necessary to put it in the garden, you can simply place it on the grass. The main thing is that nutritious soil with fertilizers is poured inside. Also inside the barrel you can fill in compost, the remnants of rotten boards. To speed up the growth of the bushes, you can put fresh grass or small branches under the barrel.

Following the recommendations of experienced gardeners, this method of growing potatoes will allow you to get a good harvest and at the same time save your energy, money and time.

Never heard of growing potatoes in a barrel. How many such barrels are needed to provide themselves with potatoes for the winter as a result! Probably, the traditional way is still easier.

I tried to grow potatoes this way. True, not in a barrel, but in a tall wooden box. Indeed, there were a lot of tubers, but they were all small. Perhaps I was a little late with adding soil, or there was insufficient watering. Possibly poor fertilization.